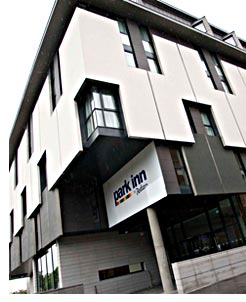 AN Aberdeen hotel has celebrated its first birthday with a major in-house award win.

Hotel group Rezidor named The Park Inn by Radisson as the top venue in its 145-strong estate on the basis of occupancy rates and profitability over the past year.
The six-storey, 185-bedroom hotel was built by property group Hazledene as part of its IQ offices and hotel development. It incorporates eight meeting rooms, a conference room and a gym and employs 100 staff.
General manager David Allan said occupancy rates in the hotel’s first year exceeded expectations.
“The hotel is in a prime location in the heart of the city and we have attracted a wide cross-section of guests including holidaymakers, weekend visitors, business people and corporate clients,” he said.