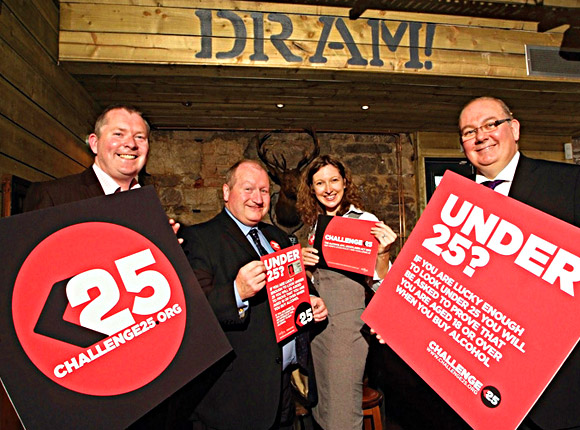 MACLAY Inns pub Dram in Glasgow’s west end was the venue as the SBPA officially launched its Challenge 25 campaign earlier this month.

Posters, badges, guides and other promotional materials have been sent to thousands of pubs to raise awareness of the forthcoming change in the law on underage sales.
Under the Alcohol Act, which becomes law on October 1, all pubs must have an age verification policy in place that requires staff to ask for ID from anyone seeking to buy alcohol who looks under 25.
SBPA chief executive Patrick Browne and president Ken McGown were joined at the launch by Cllr Stephen Dornan, convenor of Glasgow licensing board, and clerk to the board Mairi Millar who endorsed the move to Challenge 25 in venues around the country.
“We welcome the introduction of Challenge 25 and commend the wider trade for its efforts in complying with the new laws,” Dornan said.