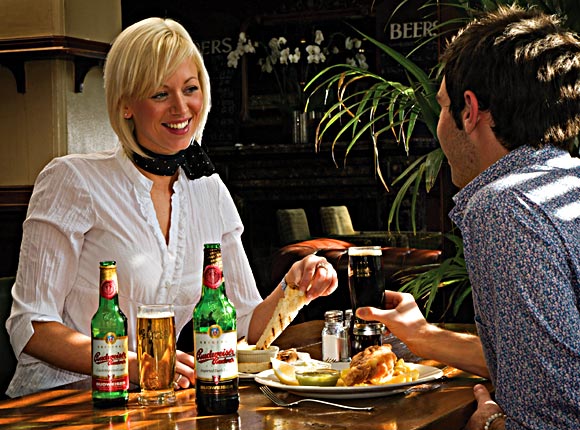 LIKE Fred and Ginger, Morecombe and Wise and Ant and Dec, food and wine have enjoyed an enduring partnership.

But it seems there’s a new contender vying for its place alongside dishes on pub and restaurant menus.
Beer is emerging as an accompaniment for a range of dishes, from savoury to sweet and pub grub to fine dining.
And brewers say pub and restaurant operators who don’t get in on the act could be missing a trick.
Alisdair Hamilton, on-trade sales director for Molson Coors Scotland, told SLTN the potential of matching beer with food should not be underestimated.
In the past two months, Coors has staged several events for its Scottish customers to highlight how its portfolio of beers can be paired with different types of food. Matches included confit duck spring roll with Blue Moon, west coast mussels in Thai broth with Singha, toasted bruschetta and smoked salmon with Coors Light, spiced roast vegetable and butternut squash soup with Cobra, lime sorbet and fruit salad with Corona and sticky toffee pudding with Doom Bar.
Hamilton said the growing number of world beers available in the UK has opened up the possibilities when it comes to matching beer and food.
“The potential in beer and food matching is huge,” he said. “It’s something we see mileage in and it can benefit publicans because it’s something that’s quite hard to do at home.
“Wine definitely has its place but I think the diversity of beer is often overlooked.
“It’s not for every pub but the idea of beer and food, like a pie and a pint, is not new – it’s about broadening it out now.”
In terms of effective combinations, it’s broadly held that blonde beers work with dishes that would traditionally be paired with a white wine, and continental lagers or ales can act as suitable substitutes for red wine. Fruit beers are considered best-matched to dishes that would be paired with a rosé wine.
For Hamilton, though, the possibilities are endless.
“Most people tend to stick within the broad rules but there’s no right or wrong,” he said. “Cobra is recognised as a good match with curry but it also goes well with cheese; Doom Bar goes well with red meat; and with Animee [three new beers pitched at women which Coors launched in July] we’ve got dishes in mind for that. We’re fortunate that we have a global portfolio of beers so this is one aspect we can help retailers with which is underexploited.”
Molson Coors isn’t the only brewer to think beer and food matching has yet to reach its full potential in the UK.
The team behind Czech brew Budweiser Budvar said while it’s commonplace in its homeland, the concept is still in its infancy in the UK.
Jill Sutherland, who heads Budvar UK’s sales operation in Scotland, said the beer complements a variety of cooking styles and flavours.
“What more and more hosts are discovering is that Czech beer, brewed originally to complement a cuisine very much focused on pork and beef dishes lavished in rich sauces and sopped up by potato flour dumpling, is also ideal with less hearty dishes,” she explained.
“Budvar Original is proving itself a great partner with fish and chips as well as ham dishes such as ham hock terrine; it also goes well with a traditional pork pie as the pastry goes well with the maltiness of Budvar, leaving a clean taste. Likewise, Budvar Original is a good match with barbecued or grilled food as the food’s slight smokiness again complements the maltiness of Original.
“Given that the traditional shape of the on-trade is undergoing such a rapid transformation with more and more emphasis being put on the provision of well-cooked food, it makes sense that the realignment of beer to cope with these new realities continues.”
And it’s not only world beers that are reckoned suitable for pairing with food.
Edinburgh-based Innis & Gunn reckons oak maturation gives its beers “complex and diverse” flavours that can be paired with many foods.
The firm is actively promoting beer and food matching to consumers through a series of dinners (see story right); and it’s urging operators to get behind the concept and promote dishes that put beer “on the same gastronomic footing as wine”.
“Beers should be described on the bar and on menus in order to let customers know the flavours and aromas they will meet, in language that can be easily understood,” boss Dougal Sharp said.
“Bar staff should be trained up to be knowledgeable when speaking about the beers they are serving so they can recommend and advise and also learn to love the beers.”
In that respect Stephen Crawley, managing director of Edinburgh’s Caledonian Brewing Company, reckons the UK on-trade should follow the US model. Crawley, who concedes the brewing industry has been slow to wake up to the potential of beer and food matching, told SLTN it’s the norm in the States for beer to be presented alongside suggestions of dishes to accompany them.
Arguing that in some ways beer is easier than wine to pair with food, thanks to its “variety of flavours, ABVs and colours”, Crawley also advocates promoting beer alongside traditional, locally-sourced Scottish dishes.
“For me, less choice but better quality is the future [for pub food in Scotland], instead of massive menus,” he said.
“There’s nothing wrong with stovies or a really good quality Scotch pie if they’re done well. And we should bring in seasonal fresh vegetables instead of sourcing them elsewhere in the UK.
“Traditionally, people in Scotland would eat herring on oatcakes, drink water and a little bit whisky, and the diet was a lot healthier than it is now.”
Crawley fears, however, that beer will continue to play second fiddle to wine when it comes to food until it’s presented on lists and given the same profile in outlets.