Operator takes restaurant to Stockbridge and plans moves down south 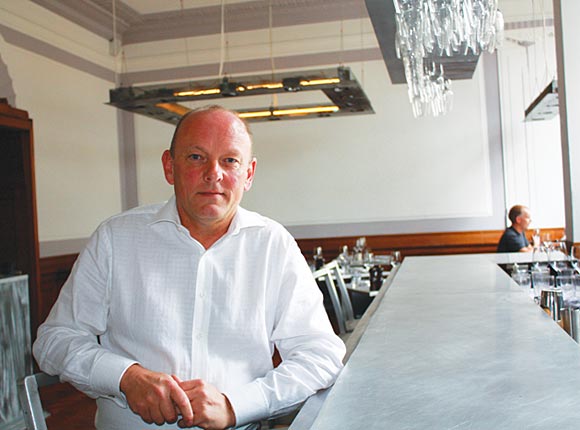 OPERATORS may not have the same access to capital as they did before the recession.

But that’s failed to deter one Edinburgh restaurateur from moving to bigger premises in the capital and embarking on ambitious plans to launch businesses in Leeds, Manchester and London.
Two years after opening Cafe Fish in Leith, a restaurant specialising in seafood caught in Scottish waters, Richard Muir transplanted the concept to bigger premises in Stockbridge in July.
And he’s set to follow that up by closing in on a deal to acquire three sites south of the border.
Talking to SLTN last week, Muir revealed his plans to roll out Cafe Fish to a site in Leeds and said he is in talks with an “iconic Champagne house”, which will see the development of a new concept for the restaurants he’s close to acquiring in London and Manchester.
The expansion is being funded by private sources, with Muir expressing his dissatisfaction with the banks’ attitude towards the restaurant industry.
“Sadly, the banks have got zero interest in this sector,” he told SLTN.
“They’ve always got an excuse to not lend you money. The line on the restaurant industry is that it’s discretionary spend. But without discretionary spend, I would say the whole high street would just collapse. Everything we do in life is discretion expense, really.
“There is money available, but it just comes at a ridiculous price, so we raised the finance ourselves.
“More equity has gone into the business but it’s money well spent.”
Despite his hostility towards current banking practice, Muir said it is liberating to not be dependent on their support, even though it has slowed down his rate of expansion. He also seems unfazed about growing the business so aggressively in the current economic climate.
“It [expanding into other cities] brings the challenge of controlling the business remotely,” he said.
“The four sites will be run from Edinburgh. But I am already involved in business in London and I’m down there on a weekly or fortnightly basis.
“I also used to run businesses in Leeds and Manchester, so I know that M62 corridor and both cities well.
“The key thing is getting the right people in place. We will inherit good teams in each of the sites, and have already earmarked the senior team in terms of who’s going to do what, so I’m very comfortable in that regard.”
Muir can at least focus on his ventures down south in the knowledge that all is well on the domestic front.
Cafe Fish is said to be adapting well to life in its new Stockbridge home (formerly home to Zanzero and, before that, Circus Cafe), where £100,000 was invested in new services infrastructure, a new kitchen, bar and aluminium oyster bar.
Muir is delighted to have finally secured the site, having been unsuccessful with a bid when looking for premises to launch Cafe Fish two years ago.
“It’s a beautiful Art Deco interior, it’s just stunning,” he said. “I’ve always loved it so we feel very at home.
“We’ve just dropped Cafe Fish straight in there from Leith without really changing the offer or the wine list; we’ve just added a few things to it.”
And Muir plans to do exactly the same with Cafe Fish in Leeds, where seafood landed on the Scottish coast will very much be the order of the day; October has been slated for the opening.
“We change the menu every day, so we’re not in a situation which ever gets static,” Muir said.
“We’re constantly tweaking it, so it’s very seasonal. The wine list is also fairly fluid and we’re always looking for new things to add.”
Supporting Scotland’s fishing community and coastal towns is a subject close to Muir’s heart and his plans for London and Manchester will also feature seafood landed north of the border.
But plans for both sites are still in development. “We’re in discussions with an iconic Champagne house that will give us a strong Champagne-led offer, coupled with a really strong food offer,” he explained. “We’re working the ideas through with the team just now.
“We’ll initially open in Manchester and hope to roll it out to London, though [the site in] London currently trades as a very successful restaurant now so we’ll stick with that in the short-term.”