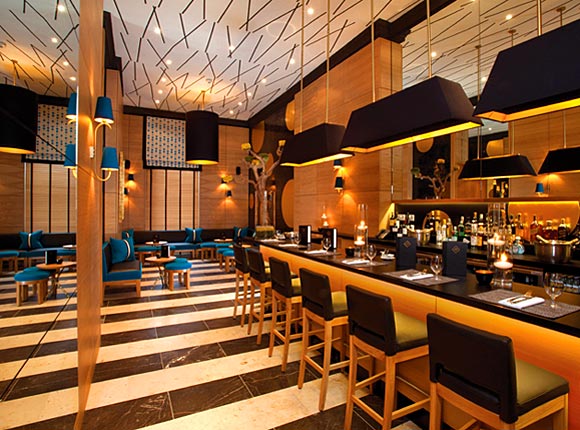 ITS name may be rooted in Scottish history, but the design of Edinburgh brasserie The Honours was inspired by the 21st century.

The latest venture from Michelin-star chef Martin Wishart, The Honours takes its name from its location on North Castle Street – the road in which novelist Sir Walter Scott is said to have lived when he rediscovered the Scottish crown jewels, known as The Honours of Scotland, in Edinburgh Castle.
The venue, which opened in July, represents a departure from the fine dining offered at Wishart’s eponymous restaurants in Leith and at Cameron House at Loch Lomond.
In premises acquired from the property arm of the Murray Group – and which was latterly traded by Tony Singh as Tony’s Table – the chef has opted to launch a less formal, “buzzy” brasserie, in partnership with friend and former colleague Paul Tamburrini.
In food terms, the concept allows for a broader menu and quicker service, with tables generally being turned more frequently than a formal restaurant.
In design terms, longevity has been woven into the interior fabric, with hard-wearing fixtures and fittings in place.
To bring his vision to life, Wishart once again turned to Edinburgh-based Ian Smith Design, which was responsible for the revamp of Restaurant Martin Wishart in Leith in 2005 and designed the interior of his restaurant at Cameron House.
Wishart told SLTN the aim was to create an interior that reflected the brasserie concept.
“The Honours is very different from both restaurants, which are softer with carpets and drapes,” he said.
“With this, it’s busy and fast-paced. Being a brasserie you don’t expect people to sit for three hours.
“There is a lot of wear and tear. It’s designed so we can turn the tables.”
The anticipated high volume of traffic had a major influence on the design.
The eight-week refurbishment, which got underway in May, saw a black and white stone floor laid and high quality tables and chairs brought in.
Contemporary natural colours have been used throughout the 65-cover restaurant and bar area – a move Wishart said has created a “light, bright environment”.
The kitchen was also subjected to a major overhaul, which included the installation of new ventilation and a bespoke stove, sourced in France.
For designer Ian Smith, the layout of the space had a major influence on the colour-scheme and materials used.
The black and white stone floor was laid to create horizontal stripes in a bid to make the space appear wider, while mirrors were used to give a greater sense of space.
The style of dining at The Honours also influenced Smith’s design choices.
“I approached this differently to the Michelin-star restaurant because it’s less formal,” he told SLTN.
“With the Michelin-star restaurant it’s all about the food.
“With The Honours, yes it’s still all about the food but it had to be glamorous to attract people from George Street; it had to compete visually and be glamorous and chic.
“And the materials we chose had to be able to cope with a high volume of traffic.
“We’ve used natural colours but we’ve glammed it up with gold leaf.
“It’s east facing so it doesn’t get the sun – it was important that it was warm and ambient.”
The interior seems to have been a hit with customers so far.
Wishart said The Honours had more than 1600 pre-bookings ahead of its launch in July, and has averaged more than 1000 covers a week since it opened.
Although he wouldn’t give a total cost for the project, Wishart said it was money well spent.
“It has exceeded all our expectations and targets in our business plan,” he added.
“It’s comfortable to sit in and has a lovely atmosphere – Ian has done a fantastic job.
“When you look at the cost of some things on paper it can give you a bit of a shock but if you buy quality, it does last.
“We asked Ian to come up with a vision for The Honours; we had a number of meetings and made a few tweaks but we didn’t stray too far from the original drawings.
“We’re really pleased with it.” 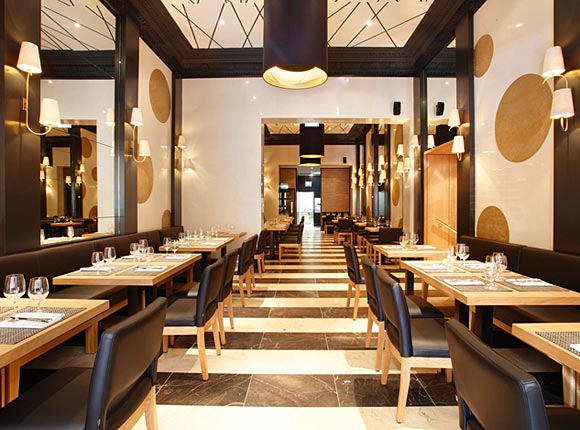 (Image: The black and white stone floor was laid with horizontal stripes so the space would appear wider.)