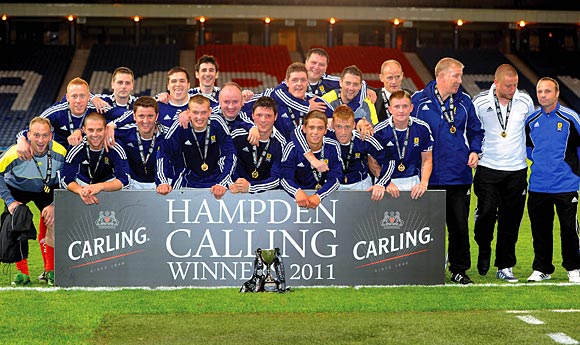 A TEAM of football enthusiasts from Edinburgh were crowned champions in a Scotland-wide tournament hosted by Carling.

The lager brand’s Hampden Calling competition, launched in May, saw five-a-side teams in Aberdeen, Edinburgh, Inverness and Glasgow compete in regional heats. The best players from each team then formed 11-a-side teams to represent their home cities, with the Edinburgh and Glasgow sides going on to face each other in the final at Hampden late last month.
Phil Whitehead, director of Molson Coors Scotland, said the Hampden Calling competition underlined Carling’s links to Scottish football as sponsor of the Scottish Cup and the official beer of the national team and stadium.
“That association with Scottish sport is something we’re keen to continue as we build the Carling brand north of the border,” he said.