Whisky has returned to growth in the Scottish on-trade, according to data from CGA Strategy. Distillers talk about the reasons why 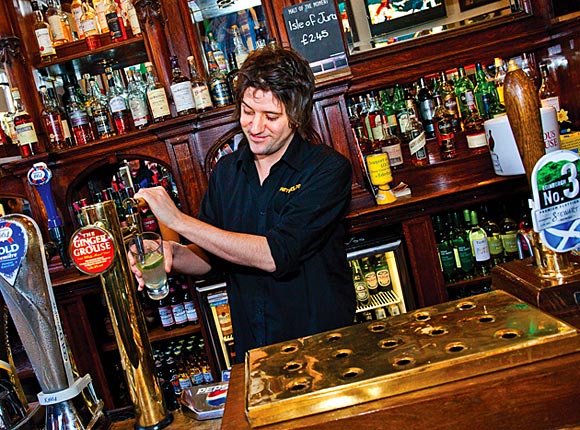 UNTIL the global recession started to check growth, the story of whisky over the last decade has all been about explosive growth in export markets.

But while sales boomed in emerging economies like Brazil, Russia, India and China, as well as other parts of Asia and South America, it seemed there was little prospect of growth for Scotch in its domestic on-trade.
Not so any more, it seems.
According to figures acquired by SLTN from CGA Strategy, total sales of Scotch in Scotland’s bars, restaurants and hotels were worth £96.8 million in the year to May 14, up from £92.5m over the 12 months the year before.
It was a welcome turnaround for distillers more used to seeing growth overseas rather than at home in recent years, especially during a continuing economic downturn.
But what factors have driven this turnaround?
Why is Scotch back in the black at home?
“There are probably several factors driving growth,” said Andy Corris, senior brand manager for Glenfiddich at distributor First Drinks.
“I can only really talk about Glenfiddich, but it seems that consumers are getting more interested in brand provenance, which is certainly good for a brand like Glenfiddich.
“Malts are back in growth, which may be because consumers still see them as an affordable treat, despite the tough economic conditions.
“I also think brands get the benefit from continuing to invest [in their products].”
With the Glenfiddich thought to be best consumed neat, either with ice or a splash of water, Corris said there’s been little attempt to promote it in cocktails or longer serves.
But he can see it’s a strategy that’s reaping dividends for others. Maxxium-distributed Famous Grouse – Scotland’s top-selling whisky – seems to be one.
“In the current climate we have seen that consumers are tending to go out less often and spending more when they do go out,” said Peter Sandstrom, marketing director at Maxxium UK. “Consumers are looking for more premium experiences so cocktails and mixed drinks play a big part in capitalising on this trend.
“We have recommended serves for each expression in the family, for example The Black Grouse’s recommended serve is the Black and Black.
“The Famous Grouse has even brought one of its most popular serves in Scotland ‘on tap’ as part of an innovative trial with The Ginger Grouse bar tap.
“The Famous Grouse is always looking to break new ground within the drinks industry, and The Ginger Grouse bar tap trial is aimed at encouraging more people to trial the serve.”

More young people are approaching me for whisky training. They know that with knowledge comes sales.

That distillers are open to their wares being consumed in a variety of new ways is said to be helping whisky attract younger drinkers, which has traditionally been a hard nut to crack.
At Ian Macleod Distillers, owner of Glengoyne Highland single malt and the Smokehead Islay malt, the trend is “driving growth” for whisky alongside “promotions, brand and category innovation”.
“By offering cocktails and mixers whisky has opened up to a larger and in many cases younger audience, promoting Scotch in a more modern, contemporary and relevant way,” said marketing director Iain Weir.
And the more people drink whisky the more staff want to learn more about it, according to Weir’s colleague Danielle Murphy, business development manager at Ian Macleod.
“I have seen an increase in younger people approaching me for whisky training due to their lack of knowledge and understanding, not only of how the whisky industry operates, but whisky in general,” she said.
“They understand that with knowledge comes sales and up-selling from perhaps a 10 year old Glengoyne to a 17 year old Glengoyne.
“This increase has come primarily from the hotel side, where they recognise they need to know about their national product, especially when selling to tourists.”
With research suggesting that more and more tourists are being motivated to come to Scotland because of whisky and the attraction of visiting the country’s many distilleries, it seems there will be even more reason for bar staff to have a good working knowledge of the ‘water of life’.
“Scotch whisky distilleries welcome over one million tourists a year and sales from these attractions are worth around £22.4 million to the Scottish economy,” said Derek Brown, brand heritage director at The Famous Grouse.
“The Famous Grouse Experience is the most visited distillery in Scotland welcoming over 100,000 visitors a year.
“It provides us with a great opportunity to communicate our brand story and its heritage to our customers, boosting sales to both our UK and overseas audiences.”
With the category in growth at home and abroad, the future continues to look bright for Scotland’s national drink.