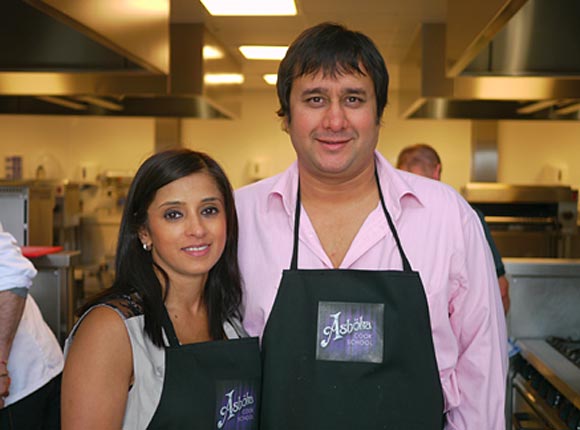 THE husband and wife team behind the Ashoka restaurant chain have launched a new cook school.

Jiggy and Sanjay Majhu, who bought the Harlequin restaurant group from Charan Gill in an £8 million deal in March 2005, have joined forces with Motherwell College for the new venture.
The Ashoka Cook School will run a range of classes on how to prepare Indian cuisine, with the first course taking place at the Lanarkshire college on September 17.
Classes, which range in price from £40 for a two-hour night class to £250 for the Ashoka Gold weekend class, allow attendees to choose from five different menus spanning starters, main courses and accompaniments.
The Gold class features a five-course banquet and includes a presentation on running a restaurant business.
The courses will be led by Ashoka executive chef Dali, with James Tagg, former executive chef at Rangers and now executive chef at Manchester United, a non-executive director of the school.
Jiggy told SLTN the new venture, in which the Apple Harlequin Group has invested a claimed £50,000, is the realisation of a long-held ambition.
“When we did the [Ashoka] cook book [in 2006] I thought about a cook school,” she said.
“It was always my dream to do it.
“We were looking for premises and we got the opportunity to link in with Motherwell College – they’ve got brilliant facilities and great management.
“The classes are very flexible and we’re aiming to tap into all markets, from the gift market to corporate bookings and stag and hen parties. We did a trial last week and people loved it.
“I think it’s good if people know how to make the dishes; there’s no risk in us losing [restaurant] business over it.”
The Majhus are marketing the Ashoka Cook School through their restaurant group, which includes six Ashokas, four Ashoka Shaks, the Green Chilli Cafe in Argyle Street and tapas bar and restaurant Las Ramblas in Bearsden. Customers can buy cook school vouchers in the restaurants, from Harlequin’s head office or through the cook school website (www.ashokacookschool.com).
Sanjay hopes to attract around 3000 customers to the school in its first year.
“It’s a relatively low start-up cost, compared to the restaurants, and we expect it to be a profitable business,” he told SLTN. “It’s difficult to forecast but next year we would expect to attract 3000 customers; 3000 heads a year would be brilliant for us.”
Speaking about the wider business, Sanjay said Harlequin’s restaurants are performing well in the current economic climate. Consolidation is the watchword for the group, which recently sold the Ashoka at the Mill and Kama Sutra restaurants to Sanjay’s brother Sandeep, who also operates Charan Gill’s Sauchiehall Street venue Slumdog under management contract.
“We’re consolidating what we have until we see how the economic climate works out,” he told SLTN. “The social voucher scene, like Groupon and Living Social, is becoming more important and we’ve got to be part of that. We’re just having to paddle more than before.”