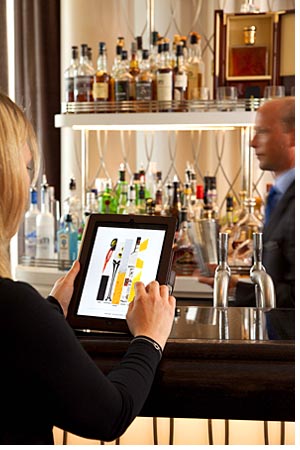 AYRSHIRE resort Turnberry has taken its drinks menu to the next level, making it available on iPads.

Management bought ten of the tablet computers and uploaded the wines, whiskies, beers and cocktails available at the bar in a bid to give guests a “more colourful and highly informed” choice of the range available.
The move means the drinks list can combine images with more information and background on the brands, cocktails, winemaker or grape varietal. Turnberry’s recently-launched range of golfer’s wines, including personal selections from players like John Daly, Retief Goosen and Arnold Palmer, will also feature on the new menus.
Initially available in the resort’s three bars, the iPad menus may be extended to restaurant areas if they are well-received by guests.
Turnberry became what’s claimed to be the first in Scotland to embrace the new menu technology after it spread from the US to Gordon Ramsay’s Maze restaurant in London.
Director of operations Ralph Porciani said there is growing evidence iPad menus help boost sales and improve the customer experience.
“We’ve seen this in the States for a while and it absolutely improves and enriches the experience of choosing from a menu,” he said.
“The ability to combine images, with more colourful information on background to the product, be it the winemaker or the grapes, is incredibly satisfying for guests and gives them a far more informed choice than the traditional paper menu could offer.
“As with all of these things, we’re happy to trial it and should it be successful we would consider moving it into the restaurant areas too.
“Personally, I believe that once this approach is available we will see growing popularity from customers and other endorsements from top end establishments in Scotland and throughout the UK.”
Meanwhile, one of Turnberry’s commis chefs has been named Young Chef of the Year at the Academy of Culinary Arts (ACA) Annual Awards of Excellence 2011.
Dimitar Angelkovski overcame competition from top London restaurants – as well as Turnberry sous chef Ryan Murphy – to win the competition, judged by a panel led by ACA chairman and celebrity chef Heston Blumenthal.
Justin Galea, head chef at Turnberry, said the award represents further recognition for the resort’s 1906 restaurant.
“We’ve always known that Dimitar and Ryan are incredibly talented guys and we’re delighted for them both to get this far,” he said.
“For Dimitar, this is a spectacular win against the toughest competition he will ever have seen. Dimitar has great composure in his cooking, clear technical ability and a deep passion for what he does. We’re very proud to have him as part of our team at Turnberry.”