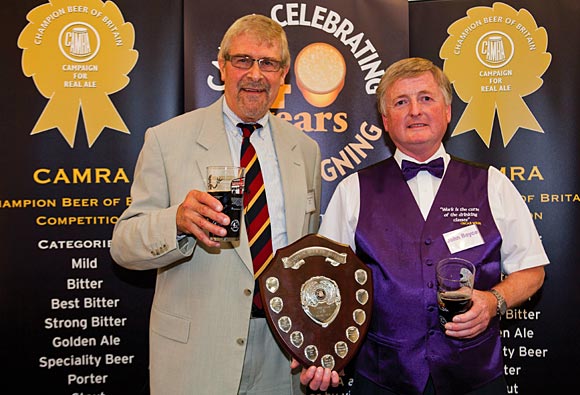 AN Essex ale was last week named the UK’s finest by the Campaign for Real Ale.

Mighty Oak brewery’s Oscar Wilde beer was crowned Best Beer in Britain by the consumer group at the Great British Beer Festival in London.
The 3.7% ABV beer has been produced by the Maldon-based brewery for more than a decade. As well as the Champion Beer of Britain award, Oscar Wilde also scooped the Gold award in the Best Mild category.
Roger Protz, chairman of the final judging panel, described Oscar Wilde as “a beer with great depth of character”.
He added: “It proves that a dark beer can be refreshing even in very hot weather.”
Speaking at the event John Boyce, managing director of Mighty Oak, said: “I always had a lot of confidence in Oscar Wilde as it was successful from day one.”
Peter’s Well, produced by Houston Brewing in Renfrewshire, was the only Scottish beer to pick up a Gold award at the event.
The ale, which has been produced by Houston for 15 years, won the Gold award in the Best Bitter category.
Caroline Wengel, who runs Houston Brewing with husband and head brewer, Carl, told SLTN that winning the award was a “massive thing” for the Scottish company.
“It was a bit like David and Goliath, because we are very small and you’re up against some big breweries,” said Caroline.
“I think there are now over 800 breweries in the UK, so we were up against all of them, and then every brewery’s got six, seven, eight beers. So if you multiply all that, that’s what we were up against.
“It really is a massive, massive thing for us.
“Whenever you work so hard at something and then you get recognition it’s great.”
Houston Brewing, which operates from the cellar of Houston pub the Fox & Hounds, produces a number of cask ales as well as one bottled ale, Houston Crystal.
Caroline said that following the CAMRA win the company is considering introducing a bottled version of Peter’s Well to the range.
The ale was originally named St Peter’s Well, after a local Houston landmark, but the brewery was forced to change the name after a legal challenge from an English brewery.
Houston was one of two Scottish breweries awarded by CAMRA at the festival.
Sinclair Breweries received a Bronze medal in the Speciality Beer category for its Atlas Wayfarer ale.
Norman Sinclair, managing director of the Orkney-based company, said he was “immensely proud” of the award.
“With the full range of Atlas beers now being produced at our base in Orkney, this award is confirmation that we have maintained the brand’s reputation for quality and taste,” he said.
“To be one of only two Scottish breweries to win a medal at the festival is a bonus and proves smaller, quality driven breweries from north of the border are still holding their own against some of the bigger names in the business.”