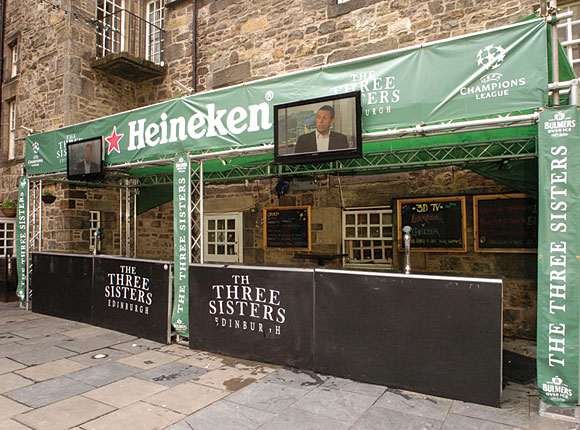 Recovery specialist insists banks are not rushing to withdraw from trade
HOSPITALITY businesses that went into the recession carrying high levels of debt remain vulnerable as the economy continues to stagnate. But there is no evidence that banks are rushing to pull the plug on the licensed trade.
SLTN spoke to corporate restructuring specialist Blair Nimmo of KPMG last week after a difficult summer that’s seen three established licensed businesses – Castle Inns, Festival Inns and the Peckham’s licensed deli group – move into administration.
Nimmo warned that there could be other hospitality failures to come, with firms struggling to finance debt during what are still tough trading times the most at risk.
“What we are seeing is firms which took on a lot of debt to acquire businesses in the good times finding that those businesses are maybe not worth what they once were, and finding that trading is under pressure,” he said.
“That means they’re generating insufficient funds to cover their interest burden, and perhaps also their ability to pay debt.
“In these situations businesses will either make other creditors take up the slack, or delay ‘cap ex’ [capital expenditure] on the business.
“But of course that [delayed cap ex] can only be done for so long before it starts to impact on trading, which makes it even worse.
“It’s a short-term play that ultimately brings in the question of value, as when a lender looks at the value [of the business] relative to current borrowings, they become less comfortable about lending to the same extent because of restricted cap ex, because of the downturn in trading and because the business is worth a lot less.”
Nimmo, who last month negotiated the sale of a batch of Festival Inns outlets to G1 Group in a ‘pre-pack’ deal, conceded that the leisure industry is “not perceived by funders as particularly attractive to lend into at the moment”. But at the same time he insists banks are not desperate to cut ties with licensed businesses, partly because the present climate is not ideal for selling outlets.
“Despite what some people would say, we have no evidence at all in the last 12 months of any bank being precipitative; it’s the opposite,” he said.
“It’s hard enough to lend at the moment without pulling the plug on your existing customers. But ultimately if they’re [banks] not comfortable with the quality of management, or if for some other reason the business just isn’t viable, then they may put a little pressure on them.
“The other reason the banks are not being precipitative is that they’re the first to realise that to put the assets up for sale in the current climate is not great, because nobody can get funding.”
Looking ahead, Nimmo said he doesn’t expect trading conditions to get notably better at any time soon. “My gut feeling is that it’s going to get worse before it gets better, but that’s not particular to this sector, that’s a general comment,” he added.