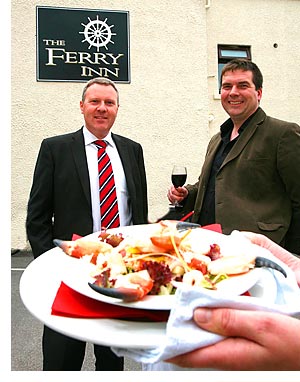 THE new owners of what’s said to be one of Orkney’s best known hotels are banking on a bumper summer season – after carrying out a rapid-fire refurbishment of the property.
Gareth and Karen Crichton re-opened the Ferry Inn four days after taking the keys to the Stromness hotel
The husband and wife, who also run The Shore Rooms Restaurant Bar in Kirkwall, financed the freehold acquisition with the support of the Bank of Scotland’s commercial banking division and two co-investors. And they had local contractors, friends and family to thank for the quick turnaround, which ensures they make the most of the summer tourist season on the Northern Isle.
The refurbishment, which cost £40,000, is said to have harnessed the property’s maritime theme.
“I had been tracking The Ferry and was aware it had real potential,” said Gary, who worked at The Ferry Inn in the 1980s.
“The trick for us was to find a way of financing the purchase and initial refurbishment without putting pressure on The Shore, where our programme of capital refurbishment has continued into our fifth year.
“We could see the investment that would be required to get The Ferry back up to the mark, and felt with the right financial support we could turn it around pretty quickly. The problem was persuading other investors that it could be done to time and budget.”
The refurbishment is said to have made the most of the Ferry’s ‘below decks’ feel in the bar area, with the nautical theme continuing in the restaurant, whose design incorporates sails and rigging.
The project has also seen the business reconnect to the leased Harbourside House, providing six additional en suite rooms to the Ferry’s 18.
In charge of the kitchen is Jimmy Young, who has moved from The Shore along with operations manager Allan Brown. Young’s former post at The Shore has been filled by Jody Watson.
“We are delighted at the rapid turnaround in fortunes for The Ferry Inn,” said David Henderson of Bank of Scotland Commercial.
“This deal demonstrates not only the bank’s commitment to the hospitality sector, it also underlines our continued activity in the tourism sector.”