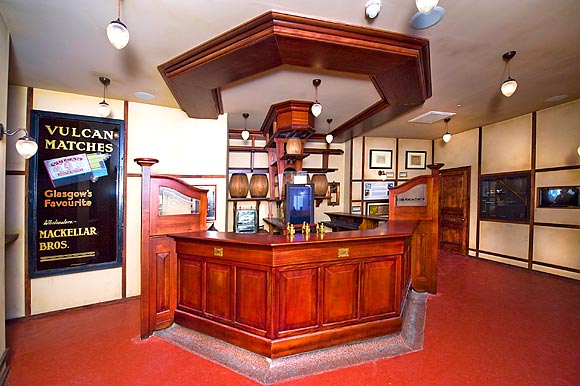 FAMOUS Glasgow pub The Mitre Bar has been brought back to life … as a museum exhibit.
Opened by James Halliday in 1927, the Mitre was a fixture on Brunswick Street for almost 80 years, before the building it occupied was demolished.
Now visitors to Glasgow’s new Riverside Museum can experience that Mitre magic again.
The pub, complete with original fittings, has been revived in Main Street, the museum’s recreation of seven shop units that occupied the city between 1895 and 1930.
The Rendezvous Cafe, one of the city’s original Italian ice cream parlours which traded between the 1920s and 1980s, is one of the other businesses to have been revived.
The Riverside Museum, which opened on June 21 and has attracted more than 300,000 visitors so far, is Glasgow’s newest visitor attraction and celebrates its transport, engineering and shipbuilding legacy.
Designed by the architect Zaha Hadid, it includes many exhibits from the city’s old Museum of Transport, which had been located for many years at the Kelvin Hall.
“Glasgow’s past as an industrial giant, a global leader in engineering and shipbuilding is celebrated in an architectural masterpiece which shows that we remain at the cutting edge of technological expertise,” said Glasgow city council leader Gordon Mathieson.

(Image: A step back in time: the Riverside Museum has recreated the city’s former Mitre Bar in its Victorian era street.)