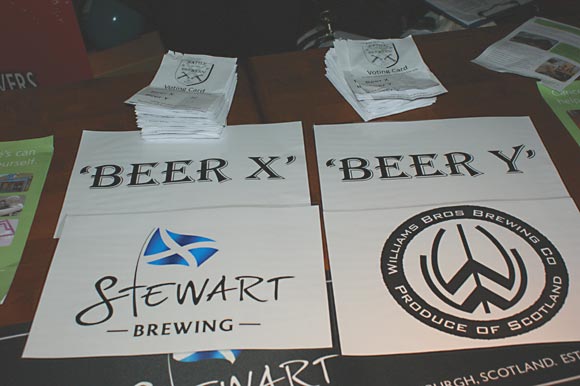 EDINBURGH’S Stewart Brewing won some friendly bragging rights last week after overcoming Alloa-based rival Williams Brothers in a ‘battle of the breweries’.
The ‘brew off’, which took place in capital pub The Queens Arms, tasked each brewer to make a 5% ABV summer ale to be blind taste-tested by members of the public. The ale created by Stewart Brewing received 77 votes, to Williams Brothers’ 49.
As well as an opportunity for beer fans to try specially-brewed ales, the event also raised money for charity. Tickets to the evening cost £5, with full proceeds donated to Maggie’s Cancer Care Centre in Edinburgh.
Winning boss Steve Stewart said a friendly rivalry has existed between the two companies since Williams brewed Stewart’s first beers when it was established seven years ago.
And he said the inaugural ‘battle’ was so successful he hopes to arrange more in future. “Many thanks to all for supporting and helping to judge the battle,” he said.
“We have two great beers on the bar and raised some cash for a great cause – that can only be good for Scottish craft beer.”