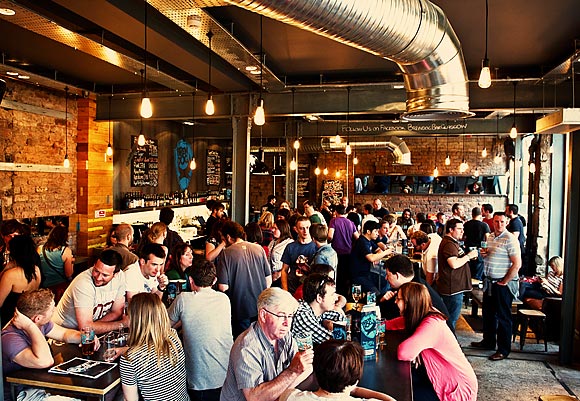 THE team behind north east brewer Brewdog has launched its third craft beer bar in Scotland in eight months – and it plans to open a further two before the end of the year.
Brewdog Glasgow opened its doors in Argyle Street, opposite Kelvingrove Art Gallery and Museum, late last month.
It was the latest stage in an ambitious expansion plan for the Fraserburgh company, which already operates bars in Aberdeen and Edinburgh.
The brewer, which was set up in 2007 and whose beers include Punk IPA, Trashy Blonde and Paradox, aims to open a further two bars before the end of the year and at least five more outlets in 2012.
Brewdog secured the Glasgow premises, which has traded under various names in recent years, including Blas and Museo, after asking consumers to source potential sites for Brewdog bars in their home towns and cities. The Glasgow outlet – its biggest bar so far – has a capacity of 120 and features the same “utilitarian and minimalist” interior design as its sister outlets.
Costing a claimed £400,000 to develop, the bar has an “industrial, warehouse” feel, with gym flooring on the walls and charity shop-sourced sofas.
The reclaimed brick bar has 14 draught taps offering beers from breweries around the world, including Stone, Three Floyd’s, Mikkeller, Struise and De Dolle.
The food offer includes cheese and meat plates designed to complement specific beer styles, and hop pizzas, which are said to sell well in the Aberdeen and Edinburgh bars.
Brewdog co-founder James Watt said the quick-fire opening of the three bars highlights just how popular craft beer is becoming.
“Our mission is to make people as passionate about beer as we are and our network of bars not only poses a threat to the insipid yellow mainstream lagers that populate the on-trade, it provides an alternative to the drab, soulless, unimaginative bars that peddle them,” he said.
“We always want to shorten the distance as much as possible between ourselves and the people who drink our beers, so letting them take charge of the Brewdog Glasgow location was an obvious route to take.
“It’s not the first time we have consulted our fans on key business decisions and it certainly won’t be the last.”

(Image: Brewdog Glasgow has a “utilitarian, minimalist” look in line with its sister outlets.)