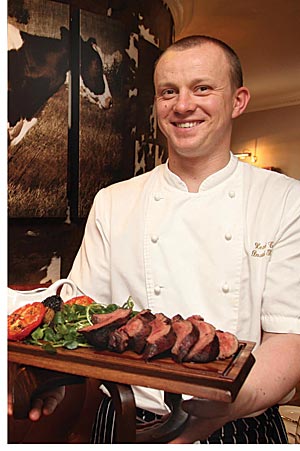 Restaurant relaunched as part of overhaul

BEEF tops the menu in the revamped restaurant at the Macdonald Inchyra Hotel & Spa near Falkirk.
The 121-cover restaurant has been revamped and relaunched as the Scottish Steak Club as part of an investment in the hotel said to be worth £5 million.
Majoring in produce sourced from local suppliers, including Scotbeef and Aberdeen-based John Ross Jr, the menu also features a number of lamb, game and fish dishes.
The a la carte menu offers ‘mini roasts for two’, which include a Châteaubriand with traditional garnish, Béarnaise sauce and Scottish Steak Club secret sauce (£45), rack of Highland best end of lamb (£34) and roasted wild halibut cooked with new potatoes and fennel (£39). A sirloin steak is priced at £19.
In the kitchen, which is headed by Dawid Kaleta, a £12,000 Josper grill ensures no natural moisture or flavours escape from the meat during cooking.
Front of house, the restaurant, which is open to hotel guests and non-residents, was refurbished by Glasgow-based Thr3 Design and features booth seating and cowhide wallpaper.
Restaurant manager Richard McCandless said the Scottish Steak Club has a vibrant and cosmopolitan feel.
“The team has put a lot of hard work and effort into the launch of the Scottish Steak Club and it is great to be officially open for bookings,” he said.
“Our aim was to take the warmth and friendliness of family steakhouses but to give it a modern and cosmopolitan feel.
“Our menus are made up with the finest local produce sourced from around the country and prepared by our highly talented team of chefs using specialist equipment, including our Josper grill, to give a unique flavour to our meats.”