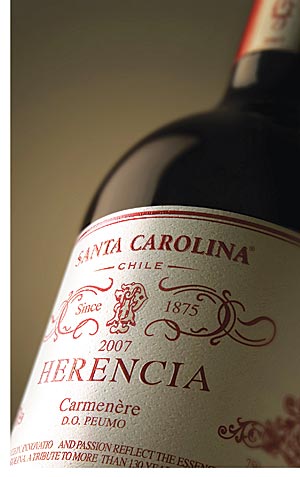 A LIMITED edition Chilean Carmenère has been launched in the UK by wine distributor Percy Fox & Co.

Just 5600 bottles of the inaugural 2007 vintage of Santa Carolina Herencia have been released – the first ‘icon’ wine from the brand.
The wine is the brainchild of Andrés Caballero, who was appointed director of wine by parent company Carolina Wine Brands in 2005.
Made from grapes from wholly-owned Santa Carolina vineyards, Herencia is described as deep garnet red in appearance with aromas of ripe plums and cherries mixed with hints of clove. The label is based on an original from 1952 in tribute to Santa Carolina’s heritage.
Santa Carolina Herencia is the latest wine from the producer, which has invested a claimed £15 million in its vineyards and winemaking facilities over the past five years, including grafting and planting more than 100 hectares in new varieties such as Sangiovese, Pinot Noir, Viognier and Riesling.
Caroline Thompson-Hill, brand manager for Santa Carolina at Percy Fox & Co, which has distributed the brand in the UK since 2001, said Santa Carolina Herencia is a “gem” in the distributor’s portfolio.
“We are working to increase distribution of their Reserva and Specialities ranges in both the on and off-trades,” she said.
“We’ve undertaken research to understand our target consumer and we are supporting new listings with bespoke marketing activity.”