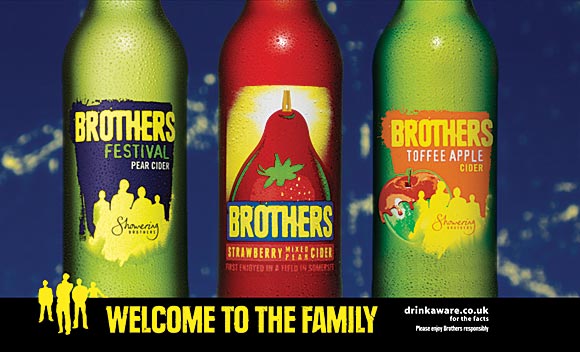 BROTHERS, the pear cider brand, has launched a new television advertising campaign it hopes will reach 90% of all 18-34 year-olds in the UK.

Featuring the strapline ‘welcome to the family’, the ad was launched first on the Brothers website as well as Facebook and YouTube and is now running nationwide on both terrestrial and digital television channels.
As well as the ad itself, online viewers can watch outtakes and behind the scenes footage.
The new advert forms part of a claimed £5m marketing investment in the brand this year.
The ad features a remixed track from Cults, the band recently signed to Lily Allen’s record label. Allen, who is reportedly a fan of Brothers cider, suggested the track via Facebook. It was then remixed to suit the more upbeat tone of the ad.
The original version of the track, called ‘go outside’, was released by the band last month.
“This new commercial is a massive statement about our brand and our commitment to building sales wherever it is stocked,” said Brothers’ managing director Matthew Showering.
“This is a key part of our biggest marketing spend to date and with the exploding fruit, festival scenes and powerful music it really tells our target audience what we are about.”
Brothers has also re-designed its website, introducing an improved cider-finder section and a new trade area where operators can request free point of sale materials.
The Brothers range of ciders includes original pear; festival pear (ABV 7%); strawberry, toffee apple and tutti frutti (all mixed pear ciders); ginger cider and bittersweet apple.
Brothers Drinks Company was founded in the early ’90s by four brothers. The company’s original pear cider first came to prominence a few years later when the brothers began selling it from a stall at the Glastonbury festival. Brothers now claims that its range of ciders is worth £30m in retail sales, growing at a rate of 101% a year.