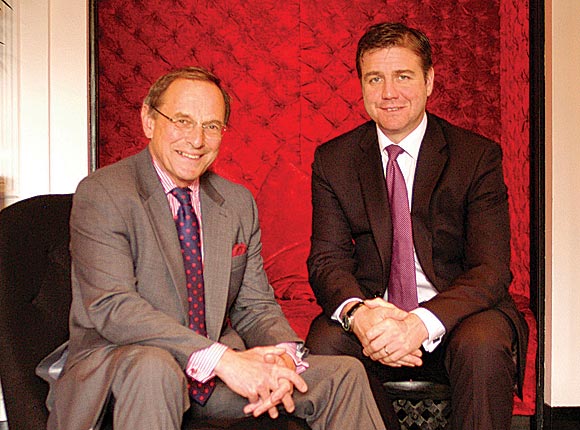 Blythswood owner tells Scott Wright the storm has past

FOR a man who saw his dream hotel fall apart before his eyes, Peter Taylor cuts a remarkably upbeat figure. It’s been three and a half years since the collapse of an interior wall seriously jeopardised plans to create a five-star hotel in the former RSAC on Glasgow’s Blythswood Square.
The event, which was followed by the main contractor going bust, delayed the hotel’s opening by two years, with the cost of remedial action, loss of business and interest on borrowings causing debts to spiral.
Today, with the Town House Company nearing the end of its first financial year with a completed hotel (the final piece in the jigsaw, the spa, was added to the 100-bedroom hotel last September), the Blythswood at last seems to be showing the potential Taylor knew it had.
In an interview with SLTN last month, Taylor and the group’s managing director, Hans Rissman, talked optimistically about the hotel’s future.
Rissman said the Blythswood was “performing ahead of our competitor set” on occupancy, with its salon bar and restaurant firmly established on the Glasgow scene and its events business growing.
“We have always known it would take three to five years for the business to stabilise properly,” Rissman said.
“Although we opened in November 2009, we only opened with the restaurant and six rooms, so we haven’t even traded a full financial year as a completed hotel.
“That’s year one almost done, so I think years three to five will be quite exciting.”
Yet it is true the hotel’s troubled inception has taken quite a toll on the balance sheet.
The Town House Company’s most recent financial results, for the year to October 31, 2010 revealed an overall bank exposure of £32 million.

We always knew it would take three to five years for the business to stabilise properly.

However, the financial position has since been strengthened with the sale of two hotels (Channings and The Howard) and serviced apartments (The Edinburgh Residence) in the capital, which are thought to have raised around £10m.
The company also expects its ongoing insurance claim relating to the collapsed wall to improve the accounts further; one payment has already been received.
Taylor, who last year won SLTN’s Award for Industry Achievement, confirmed the company had renegotiated its deal with its bankers during the last financial year. He expressed his satisfaction with the support the bank had provided.
“We’re delighted with the overall picture,” he told SLTN.
“The publication of our results was delayed because we were seeking confirmation of longer-term funding as a going concern,” he said.
“That took a long time to go through, understandably, but the basic message is the bank were very pleased.
“We got longer-term funding from the bank and we’re moving forward with The Bonham in Edinburgh and Blythswood Square.”
Taylor admits the twin sale of Channings and The Howard was difficult, but believes the company is better positioned as a result, not least because it has freed up managerial time to focus on the much larger Bonham and Blythswood.
“Maybe we grieved a bit a year ago – now in many respects we’re relieved,” he said.
“It leaves us free to reinvest in The Bonham – we’re creating a new bar there – and here.
“This [the Blythswood] is the new baby.
“It’s a significant development and it’s been a long and difficult journey, [with] the contractor going bust, the wall collapse, all sorts of issues.
“But it’s really flying now and Hans has done a brilliant job with the team. It’s not really about the bricks and mortar – it’s about people.”
Its birth may have been shrouded in darkness, but at last brighter skies are emerging over this famous Glasgow building.