IT may still be relatively new technology, but many operators in the trade are already embracing 3D as a way to attract sports fans into their premises. Sky is broadcasting a growing number of sports in 3D, and last month the BBC joined the party when it broadcast the Wimbledon finals. 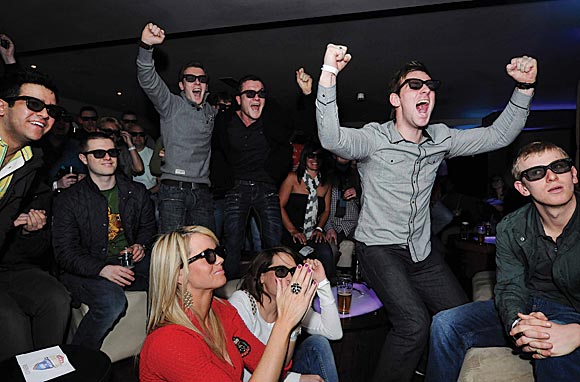 But can the technology make a difference to pubs? Frank Murphy of the Clockwork Beer Company on Glasgow’s south side reckons it can. The pub, which is part of the Maclay Inns stable, was an early adopter of 3D, buying two 3D sets in time for Sky’s first broadcast of a football match using the technology early last year.
The 3D sets are located upstairs from the main bar, which has several 2D screens, allowing the premises to expand its football area during match days.
Frank told SLTN early ‘bugs’ in the system, such as a delay between the 3D broadcast and the 2D screens, have been ironed out and the service continues to improve.
“It’s good and it’s got better as it’s gone on,” he said. “If you’re just watching the standard gantry shot it doesn’t show off the 3D to the best because you don’t have the depth of field. But corners, penalties and all that stuff are all down on the sidelines, where it shows off the 3D to the best effect.
“Something like the Six Nations, where there’s a trackside camera going up and down, will be amazing.”
Billie Jones, trainee manager at The Crown Hotel in Newton Stewart, said 3D has proved popular with the locals and helped attract new customers, with the hotel using local media to advertise major sporting events being shown in 3D.
“To tell the truth everyone’s very impressed with it, from very young to quite old,” she said.
“All the teenagers who come in to watch the football are very impressed and when couples come in with children, the children obviously love it.”
Not everyone’s experience with 3D has been positive, however.
George Williams of The Portcullis in Arbroath said while his younger customers request 3D, others have complained that the picture gives them headaches. And as the pub’s 3D set is in the same room as its 2D screens, the previous delay between the footage appearing did cause problems.
“I don’t know where they’re getting this thing that 3D is the way forward,” said George.
“I’m not convinced. For films, definitely, but for football I think there’s a long way to go for the technology to make my customers go ‘wow’.”