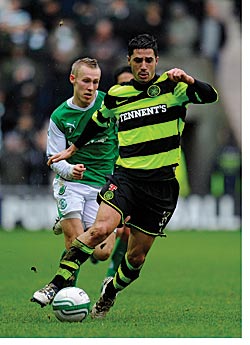 SKY Business has given Scottish pubs some welcome breathing space after confirming its prices will be unchanged going into the new football season.
Sky, which is regularly criticised in the trade for its prices, said the move gives customers ‘more certainty over their entertainment outgoings’.
But critics have claimed the broadcaster should have gone a step further and cut prices.
“They [prices] should be going down,” said SLTA chief executive Paul Waterson.
“It’s over-priced. As an association, what we really want to see is these prices becoming more competitive.”
Alan Robertson, who owns The Club Bar in Paisley, broadly welcomed news that Sky had held prices, having seen his monthly bill rise from £700 to £1100 this time last year.
He described Sky, which kicks off its coverage of the 2011-2012 SPL season with Rangers versus Hearts at Ibrox on Saturday, as a “necessary evil”.
“For the quality you get, there’s nothing better,” he told SLTN. “But you pay through the nose for it.”
In a statement confirming the price hold last week, Sky Business unveiled a range of ‘innovative products’ it said will help pubs make the most of their subscriptions, including free wi-fi through The Cloud.
Sky Ultimate customers will also continue to access 3D for free (though operators have to buy a 3D-ready set), while new additions have been made to the PreviewLive website.
Operators who sign up to Sky Ultimate now will have access to ‘free viewing’ until the end of August. Then, from September 1, they will have three months to decide whether subscribing to it is working for them, instead of being locked in to a 12-month agreement.
“Our aim is to give our customers great value for money while helping them grow their business,” said Sky Business MD Iain Holden.