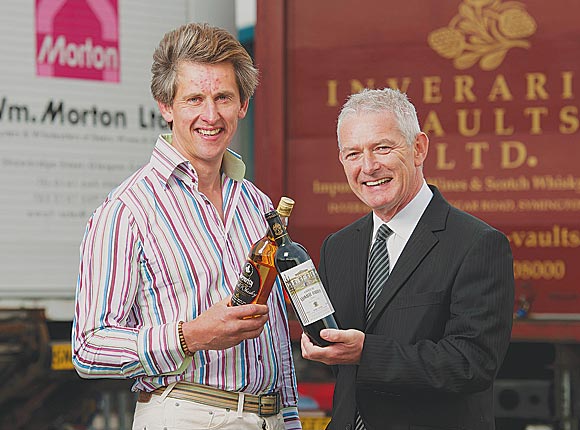 HAMISH Martin places a lot of store in his gut instincts. It’s a trait which led him to rebuff several offers for Inverarity Vaults, the Biggar-based wine and spirit merchant he established with his father 20 years ago, before finally accepting an offer from Wm Morton last month.
While takeover interest from other firms, mostly from south of the border, left him sick with worry, Hamish told SLTN there were no such concerns when he opened dialogue with Stephen Russell, Morton’s long-serving managing director.
“When I had offers before, it wasn’t just a matter of thinking about it, I was physically ill,” he admitted. “It sounds like madness, but I was.
“With this [Morton deal], there hasn’t been one moment where I’ve woken up in the morning, or gone to bed thinking, ‘oh shit’. I’ve gone to bed and woken up thinking, ‘yeah, great’.
“It’s everything that Inverarity needs for the future.”
That Inverarity, which includes a retail arm and a successful wine school, will continue to trade as an ‘autonomous subsidiary’, for the time being at least, is likely to have been one of the attractions of linking up with Morton.
Hamish will continue as managing director of the business and will join the board of Inverarity’s new owner, which conducts its wine operations as Cheviot Wines.
But while he was understandably keen for the Inverarity name and all it stands for (the support it offers customers through training is thought to be one of its biggest assets) to continue, his willingness to sell to Morton was also underscored by pragmatism.
By joining forces with the Glasgow-based wholesaler he feels both organisations are better equipped to deal with the economic challenges that inevitably lie ahead.
The merged business, which has a combined turnover of £50m and a workforce of 150, will have greater buying power with suppliers and improved distribution capabilities: both run standalone warehouse facilities and in-house logistics operations.
“You know, the trade has changed, the world is a different market and anybody that says to you ‘wait till it improves’ [is taking the wrong stance],” Hamish said. “This is the new world, this is the place we’re in and, really, combining two Scottish independent family businesses into one makes us so much stronger.
“Yes, every company has strengths and weaknesses. The idea is to look at those strengths and weaknesses and look to where we can concentrate on becoming a really strong Scottish independent drinks supplier.”
From a Morton standpoint, the satisfaction brought by the deal is all the sweeter for having failed with bids for other wine businesses in the past five years.
Russell, who said he had admired Inverarity from afar for a couple of years before making his approach, said the acquisition more than made up for losing the right to distribute Corona Extra, the imported Mexican beer, at the end of 2010. Ultimately, he told SLTN, the loss of the Corona business had been a blessing in disguise.
“Ceasing to become the Corona distributor has been the best thing to happen to us, because of the amount of time and effort it involved in our organisation,” he explained.
“It had become the tail wagging the dog. It wasn’t the lucrative contract that people thought it was.
“I have to say the day that I knew we weren’t going to renew [the contract] wasn’t a good day, but since then I’ve been happy we don’t have it.
“It probably focused the mind and accelerated a process for me.”
The immediate focus for the merged group is to unite back-office systems and cherry pick the best of the Cheviot and Inverarity wine lists.
Russell said the process of combining the lists would take six to nine months. Each currently has 800 wines, and while the combined offer will have more than that it will not simply involve the aggregation of the present lists. It’s hoped the new list will be available to customers by the start of 2012.
In the meantime, the focus is on ensuring customer service isn’t affected by the changes.
“Our ethos is similar to Inverarity’s – our customers come first and we go the extra mile to always ensure that service,” Russell said.

It’s time to be bold by the glass