A NORTH Berwick pub has cemented its status as a world beers specialist after releasing a new summer menu that matches food with different beers.
The Ship Inn, a Belhaven-owned pub run by operator group 50mls, introduced the new menu to coincide with the summer season.
Developed in conjunction with beer specialist Rupert Ponsonby, it pairs 15 different world beers with various food courses.
Matches include Budvar Dark with a salad of black pudding, caramelised apple and walnuts, La Chouffe with beer battered haddock and Blue Moon with cheesecake.
Manager Holly Maynard told SLTN the new menu has proved popular with pub customers, with the Brooklyn Lager and beef burger combination a particular success.
The Ship Inn has built its world beer range over a number of years, mostly through customer requests.
Maynard said: “North Berwick’s a very touristy town, so obviously we want to meet everybody’s needs. We get a lot of Americans and a lot of Germans in, and they started asking for lots of lagers and beers so we started getting them in. It just kind of expanded and now we’ve got a really good selection.” The range features a strong Belgian representation, including all three Trappist beers from Chimay, Leffe Blond and Leffe Brown and Liefmans. There’s also Birra Moretti (Italy) and Chicago beer Goose Island, with prices between £3 and £4 (rising to £5 for Liefmans).
Although the gantry also includes a range of spirits, beer is at the heart of The Ship Inn. The bottled world beers selection is joined by a draught offer featuring Budweiser Budvar (Czech Republic), Red Stripe (Jamaica) and Innis & Gunn Original (Scotland) and Maynard said the pub’s wet sales are slanted more towards beer than spirits. And though the pub’s clientele ranges from customers in their twenties through to those in middle-age, the world beers are proving most popular with the younger drinkers. 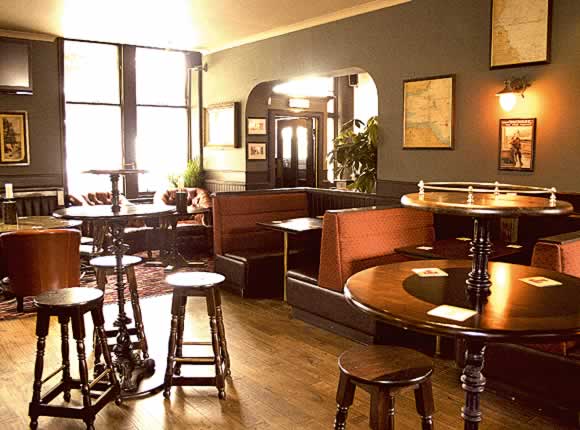 “I find that younger people drink a lot more of the world beers than older people,” said Maynard. “People in their twenties to early-thirties are drinking more of the beers while middle-aged people are drinking spirits like gin and tonics. I think younger people are more interested in trying new things.”
Being able to advise customers on world beers and make recommendations is key to building the category, said Maynard, and staff at the pub are encouraged to learn about and sample the beers when they are off duty.
“We definitely try and push people to try our beers. In North Berwick we’re the only pub who has this sort of thing, so we get people coming in just to try our world beers. It’s a small town so word gets about fairly quick.”
Such is the success of the paired menu that The Ship Inn will continue to include beer matches when it changes its menu in time for winter.