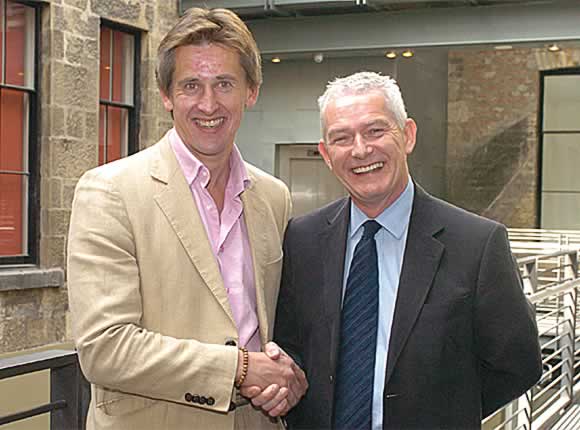 The deal effectively sees Glasgow-based Morton, which incorporates Cheviot Wines, become Scotland’s biggest independent wine supplier. It also brings months of speculation over Inverarity’s future to a close. The Biggar-based merchant had been subject to several takeover approaches in the past two years.
SLTN was given an exclusive interview with Morton MD Stephen Russell and Inverarity boss Hamish Martin last week – the day legal formalities on the deal were completed.
And Russell, who was first alerted to Inverarity’s potential after hearing a waitress rave about the supplier in a Glasgow restaurant, revealed it was a sweet moment for Morton after missing out on other targets.
“The day we met Hamish I was determined he wouldn’t walk out of the door without shaking my hand,” he said.
“We already sell a lot of wine. What this will do is give us an enhanced volume of wine sales and that should lead through to more clout with suppliers and hopefully better deals.”
The deal will see the Inverarity name continue and trade as a distinct entity within the Morton organisation.
It will be headed by long-standing managing director Hamish Martin, who also joins the Morton board.
The firms insist it will be “business as usual” across Inverarity’s head office, sales, retail (it operates a One to One wine store in Glasgow and a bar at the Festival Theatre in Edinburgh), bonded warehouse and wine school activities. The immediate priorities are to combine their wine lists – each boast 800 wines – and harmonise back-office systems.
“What we want is a really strong and enhanced portfolio of wines that we will both go out and sell,” Russell said.
“That will take a long time to do properly, because restaurateurs get thoroughly scunnered if you don’t have the wines on your list. We’re both aware of that, so we will take a lot of time to get that portfolio right.”
Martin, who established Inverarity with his father in 1991, said his instincts and the “chemistry” between himself and Russell convinced him to deal with Morton after rebuffing other offers.
“When something feels right I don’t have to think about it too much – everything within [me] says this is good,” he told SLTN. “It’s everything that Inverarity needs for the future. The key for me is that it’s business as usual and coming up with a very exciting portfolio we can all have a passion and belief in selling.”
The Morton-Inverarity tie-up continues a trend of consolidation across the Scottish wine scene that began when the Murray Group acquired Wine Importers in 2006.
Wine Importers has since snapped up TM Robertson, Harris Fine Wines of Glasgow, Cockburns of Leith and Irvine Robertson Wines, while Forth Wines was bought from Matthew Clark by a private consortium last year.