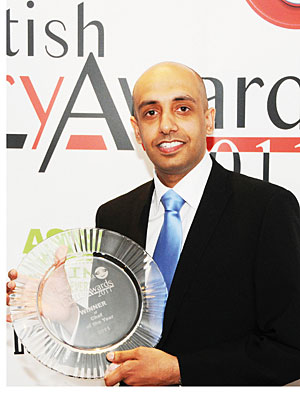 A HAMILTON chef has picked up a top gong at this year’s Scottish Curry Awards.

Ajmal Mushtaq, of Mushtaqs restaurant, overcame competition from chefs across Scotland to take the Chef of the Year title at the awards ceremony in Glasgow’s Thistle Hotel. Ajmal said winning the award was a “real honour. I am truly humbled that the judges recognised Mushtaqs is leading the way in promoting the benefits of proper Indian food,” he said.
Other winners included Ashoka Johnstone, which picked up the Team of the Year award; Balbir’s in Glasgow, which was named Sunday Post Restaurant of the Year; and Mother India owner Monir Mohammed, who took the Curry King of the Year award.