As the music festival prepares to celebrate its 18th birthday next month, two new ads continuing the adventures of Tennent’s founder Hugh Tennent have been launched.
Called Too Loud, the first ad, which is on air now and will run up to and during the festival (July 8-10), shows Hugh dreaming up the idea of staging “a party with music for the people, lager and a state-of-the-art sound system” in his drawing room. 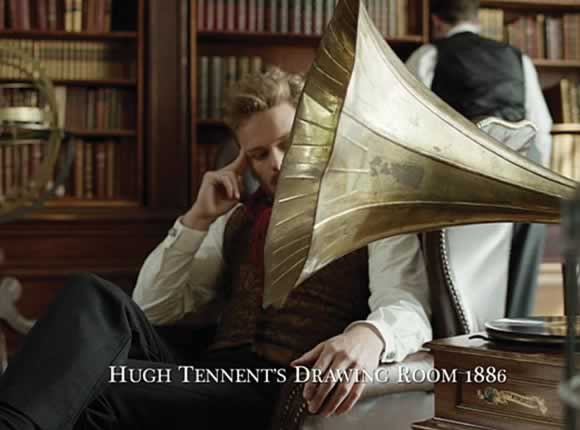 As the soundcheck blasts through enormous gramophone speakers, Hugh’s butler Barnes suggests: “Maybe we should try this outside next time, sir. In a park, perhaps?” The second ad, which will launch at T in the Park on Sunday July 10 and run for the rest of the month, is called Tents and shows Hugh and Barnes at T in the Park at Balado in 1887 trying to remember where they pitched their tent.
The brewer has also launched the Tennent’s Mini Main Stage – a ‘performance’ pod which will tour ten music bars across Scotland between now and the end of July giving pub-goers the chance to star in their own Mini Main Stage T in the Park experience. George Kyle, head of sponsorship at Tennent’s, said the ads underline the brand’s commitment to music. “We’re sure Hugh Tennent would have fully approved, and would certainly have enjoyed a pint of his fabulous brew whilst watching the main stage action,” he said.