September 1 has been confirmed as the release date for Ardbeg Alligator – the result of years of experimentation by the distillery team led by Dr Bill Lumsden, head of distilling and whisky creation at the Glenmorangie Company. The dram, bottled at a meaty 51.2% ABV, takes its name from a process known as alligator charring – a method of burning the inside of oak casks before they are filled with spirit. The process results in what looks like alligator scales forming on the inside of casks. According to Ardbeg, the use of such casks is pretty rare so this latest release is likely to turn the heads of malt enthusiasts. 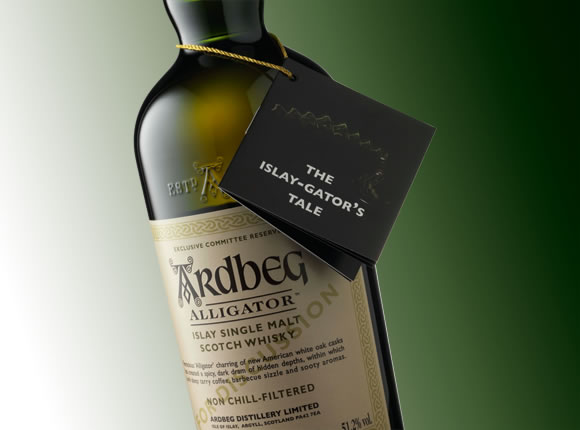 Members of the Ardbeg Committee, essentially the fan club for the Islay malt, have been given a sneak preview of what is this year’s limited edition, which will have an RSP of £55 in whisky stores. It’s bound for customers in the UK, US and European and Asian markets from September. “Since we bought and restored the Ardbeg Distillery we have undertaken lots of experiments, laying down spirit in different types of casks,” Dr Lumsden said. “This began in the late 1990s and Alligator is the happy outcome of one experiment we are really pleased with.” The announcement of Alligator’s arrival comes after Glenomorangie unveiled its biggest national advertising campaign since 2007/08 on Father’s Day (June 19). The Unnecessary Well Made campaign featured original pencil renderings by artist Vince Verma and illustrated the lengths the distiller goes to in creating the Glenmorangie single malt whiskies.