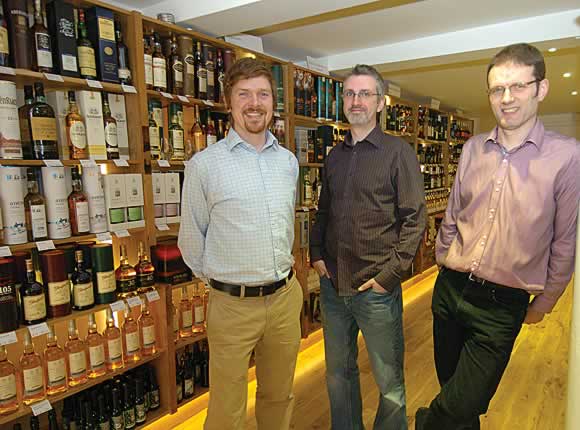 A RECORD player supplying background music is the only reference to the former incarnation of The Good Spirits Co on Glasgow’s Bath Street. The basement unit that was once home to the 23rd Precinct record store now houses an impressive array of spirits, including around 85 malts. The store is the brainchild of ex-Oddbins employees Matthew McFadyen, Shane Goodbody and Mark Connelly, who reckoned there was a gap in the retail market for a specialist spirits outlet.
“We had talked about opening our own place for a few years,” Matthew told SLTN. “With the demise of Oddbins it was a case of either we do this now or we’ll be upset when someone else does it.” Working with 40 suppliers, the trio have sourced an extensive range across all categories. But it’s whisky that dominates the offer.

Younger consumers are drinking long drinks with rum and bourbon – why not with whisky?

Displayed by region, the 85-strong range of malts includes the UK allocation of Berry Bros & Rudd’s Own Selection Ledaig 2005, which The Good Spirits Co secured ahead of its launch on May 23. The store also has its own ‘living cask’, which contained Highland Park 14 year old when SLTN visited and will be topped up with other whiskies to create a “constantly changing” liquid, which will be sold in small bottles. But it’s not all about malt.
The Good Spirits Co stocks a selection of grain whiskies, including Duncan Taylor’s North British, Irish grain whiskey Greenore, and Bain’s from South Africa. There are offers from small independent bottlers, like Hart Brothers, AD Rattray and Adelphi, and a range of blended Scotch whiskies, including The Tweeddale Blend and The Finnieston – a blended Scotch that’s designed for mixing with The Finnieston whisky bitters (peppermint or cherry) and a mixer.
“It’s a really interesting blend that’s trying to engage with younger consumers,” Matthew explained. “Younger consumers are drinking long drinks with rum and bourbon – why not with whisky? Hopefully this is a way of encouraging that. It’s a new brand with no baggage.” 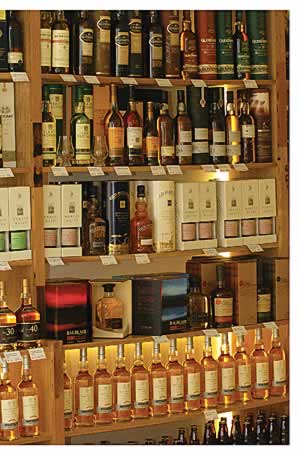 The three aim to do their bit to attract a new generation of consumers to whisky through a range of events. These include a monthly whisky club at Glasgow bar MacSorleys, events at whisky bar The Pot Still, in-store tastings and other activity through Mark’s involvement in online forum (whiskywhiskywhisky.com) and as a partner in Glasgow’s Whisky Festival.
The Good Spirits Co is also set to open its own tasting and education room on the premises in September. Matthew said the aim is to connect with consumers and the trade in an informal yet educational way.
“We want people to learn about what they like, not what they’re told to like,” he said. “It’s not about telling people what they should taste. Domestically we drink less whisky than many countries abroad and that’s something we want to address. The education aspect will give us an extra dimension to set us apart.”
Shane agreed that education will be a key part of the business going forward. “I think people can be intimidated by whisky and the industry has probably not helped itself,” he said. “If you have a relaxed whisky tasting with friends it makes it easier for people.”
Looking ahead, he said, the spirits range will be tweaked, depending on sales and new products coming on to the market. “We’re pleasantly surprised by the amount of top-end stuff we’ve sold so far,” added Shane.
“We estimated whisky would account for about 50% of our sales and that’s been the case so far. We’re working with a lot of different suppliers. If you want to get something at the right price you’ve got to deal with different suppliers. It’s a balance – we need to have the big names on the shelf because some people expect it, but if we want to be specialist we can’t do everything.”