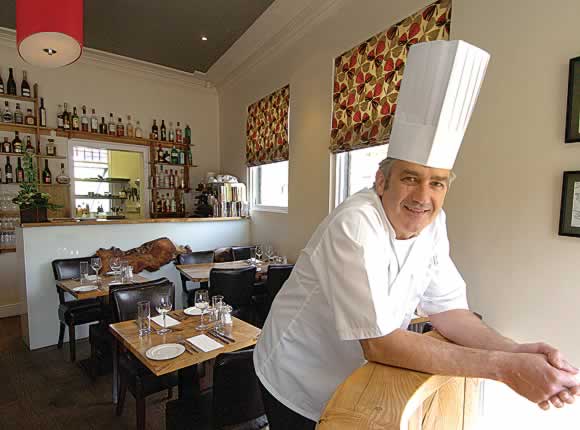 HIS name may be above the door now, but if it hadn’t been for a cruel twist of fate Ian Brown might never have opened his own restaurant. As head chef at The Ubiquitous Chip in Glasgow’s west end for 21 years, he was more than content with his lot. But all that changed when ‘Chip’ founder Ronnie Clydesdale passed away last April, just nine months before the restaurant’s 40th birthday. The loss of a man Ian described as “a boss, a mentor and a friend” prompted him to take his career in a new direction. Deciding to leave the Ashton Lane restaurant, a stint as a guest lecturer at Braehead Foods followed. But Ian yearned to get back to the kitchen and, together with wife Sheila, embarked on a search for suitable premises on their home turf of Glasgow’s south side.

People are definitely more adventurous when it comes to food. We’ve had ox heart on the menu and it sold really well.

Available units were few and far between, so the pair took a chance and approached the owner of a Greek restaurant on Eastwoodmains Road in Giffnock to gauge whether he was interested in selling. The enquiry paid off and a deal was struck to acquire the premises late last year. The couple had a clear plan for Ian Brown Food & Drink from the outset, as front of house leader Sheila explained. “We wanted to create a local neighbourhood restaurant,” she said. “Good, competitively-priced food – somewhere people can just pop in for dinner during the week or take longer over the a la carte on a Friday and Saturday night. It’s a great location; we drive up and down this road all the time and we used to look at it and think it was a great site.” But it was to be a quick turnaround. Ian was adamant the restaurant would open last November – leaving just three weeks to carry out the refurbishment. Not that the timescale fazed the Browns. 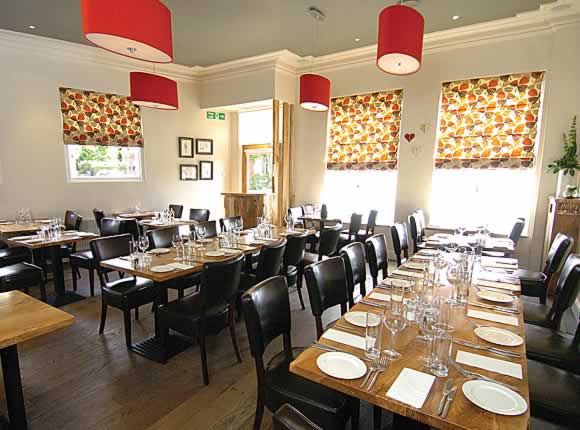 Armed with their neighbourhood restaurant vision, Ian and Sheila assembled a team of family and friends and got to work revamping the 40-cover premises. Wood by designer Paul Hodgkiss, a friend of the couple’s for many years, appears on the bar, wine storage area and tables, which have been paired with dark brown leather seats. The broadly neutral decor is offset by accents of colour in the blinds and light fittings, and images of Glasgow (including a view of Ashton Lane and one of Rogano – Ian’s favourite bar) on the walls, while the windows carry the Ian Brown Food & Drink name and logo, created by 999 Design. True to his word, the refurb work was completed on schedule. “Everyone said we had no chance of doing it all in three weeks but we did,” said Ian. “Our friends all mucked in and helped and that was invaluable – we can’t ever repay that. It was a great sense of achievement.”
The chef is equally pleased with the menu. Using suppliers he has dealt with throughout his career, including Braehead Foods for meat and game and McCallums for seafood, Ian has given a twist to the style of cooking he was known for at the Chip. The set menu, which is available from Tuesday to Saturday lunchtime (the restaurant is closed on a Monday and only the a la carte menu is available on Friday and Saturday nights) offers two courses for £11 or three for £14.50 and changes each week.

We’ve gone with our gut instinct here and most of those decisions have been right.

On the a la carte, starters range from soup at £3.60 to Loch Fyne scallops thermidor at £8.20, while on main dishes the prices run from slow cooked shin of Scottish beef with garlic crushed potatoes and honey roasted shallots at £13, to the pan-fried Scottish sirloin steak with stovies, onion marmalade and Arran mustard at £23.
There are also dishes designed to what Ian reckons is a growing consumer appetite for unusual ingredients. “We’ve had things like ox heart and tongue on the menu and they’ve sold really well,” he said. “Squat lobsters and pig cheeks go well too. I think all these food programmes on TV have made people more adventurous and willing to try new things. There are aspects of the Chip to the menu but no carbon copies. We do pigeon, we do shin of beef but in a different way – with a twist. It’s the kind of food I’ve been cooking for the past 20 years. It’s all about using the local ingredients that are available. We also have mutton from Girvan – people want to know where their food has come from and we can tell them. We listened to our customers when it came to the menu, especially at the start; it’s not all about my opinions. And we’ve tried to keep the prices competitive. Pricing also had an influence on the wine offer.
The Browns enlisted Cheviot – the wine division of wholesaler William Morton – to help compile the list. House wines are prices at £13.50 to £14 a bottle, and there’s a range of nine whites and nine reds, ranging in price from £16 to £26. “We felt we didn’t have the expertise to do the list ourselves so we got Alan Dawson from Cheviot to do a wine tasting with us and put together the list,” said Ian. “The wines are great quality but keenly priced – that’s crucial in a local restaurant.”
‘South siders’ and diners from further afield clearly like what they see. Since launching, the restaurant has been fully-booked on Friday and Saturday nights for two months in advance; and it’s doing a strong mid-week trade. Ian admits the early success has taken them by surprise. “It’s been mobbed,” he said. “We’ve had positive feedback and been really busy so it’s very rewarding. Opening this has all been about timing and fate. I’d worked in the same place for 20 years and built up a relationship with Ronnie that I don’t think I could have got working anywhere else. We’ve gone with our gut instinct here and most of those decisions have been right. I guess I’ve got Ronnie’s mindset – he was a perfectionist and so am I. If I can take a wee bit of Ronnie wherever I go then I’m blessed.”