He’s transformed the fortunes of Edinburgh bar The Mercat since taking on the lease six years ago, but Graham Blaikie’s not finished yet

GRAHAM Blaikie is not a man to let the grass grow under his feet. The leaseholder of The Mercat Bar, near Edinburgh’s Haymarket Station, always has a project on the go, a tweak to the business here and there designed to drive footfall and maintain a buzz around the bar in the city. It’s a proactive approach which has served him well in the six years he has leased The Mercat from Belhaven, allowing him to shed the bar’s less than desirable image to that of an award-winning, carbon neutral, gastro-pub. But it’s not been easy, as he explained when SLTN called in for a chat earlier this month. “It’s perseverance and just working hard at it,” he said of the pub’s steady rise, which saw him named the SLTN-Wallaces Express Licensee of the Year in 2010. “The good thing is I knew where I wanted to take the pub from day one. I wanted a food operation, because at the time my first pub was the Sportsman’s Bar in Musselburgh [also leased from Belhaven], which was just a ‘wet’ operation. “I knew the smoking ban was coming round the bend and it would be detrimental. That’s why I got offered this from Belhaven. It had a kitchen and it ticked the boxes, but it was a hard battle to turn it around. Even back then, though, the food was always good.” 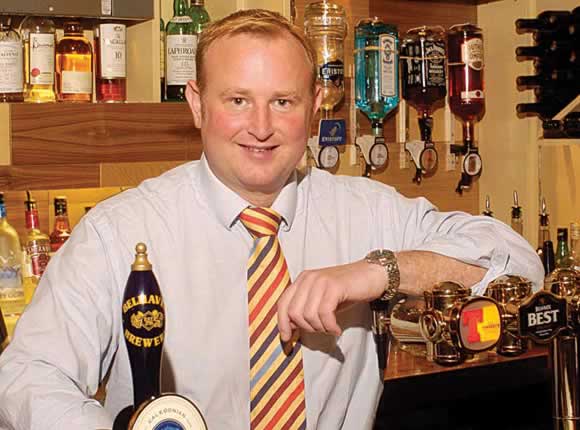 Despite its undoubted progress, there is no suggestion from Graham that The Mercat has realised its full potential. As soon as the Edinburgh Fringe and Festival finishes at the end of August, the bar will close its doors for a major refurbishment. The project will involve a switch to new LED lighting in the lower half of the two-floor level – at the cost of a cool £13,000 – the installation of new toilets and improvements to the decor.
His project will coincide with the transformation by Mitchells and Butlers of its Haymarket Bar across the road into one of its Nicholson’s, food-led outlets – a move Blaikie reckons will enhance the area’s standing.
“I’m not happy with what I’ve got just now – I want to take standards to the next level,” he said. “I’ve got a new menu in the pipeline, a new wine list, a new specialist whisky list. There’s a whole load of things I’ve got building up. I’m just waiting for the refurbishment to introduce them.”
Some of the funding for the project will come from Belhaven, which Graham secured as part of the renegotiation of his lease in April, with the rest falling on his shoulders. The refurbishment maintains a policy of continual reinvestment he has pursued since first taking the lease on.
“Every couple of months since day one I’ve spent a bit more money and all I’ve done is reinvest, reinvest and reinvest in the business,” he explained. “The point has come where I’ve said, ‘enough’s enough, let’s get everything done that needs to be done and let’s work on the business for the next five years’.”
In terms of the offer, Graham pitches The Mercat above the mainstream occupied by the likes of Wetherspoon – with whom he cut his teeth as a pub manager – but below high-end establishments like Billy Lowe’s Le Monde in the capital. He credits the late Graham Allan, the former owner of Champagne Charlie’s (“the original George Street pub”), as being a major influence on his approach to running pubs.
Graham got to know Allan as the son of his best friend growing up, and was given an early induction pouring pints and collecting ashtrays on Sunday afternoons when the pub was closed.
Years later, Allan became a mentor to Graham at The Mercat, and the connection grew when Allan’s daughter Claire, a chef, was recruited to run the kitchen. “Unfortunately he passed away in December, but I still think about him,” Graham said. “I think, what would he do if he was in this situation?”.
Allan’s voice will no doubt be making itself heard frequently as Graham ponders his next move, which he hopes will see him acquire a pub in his own right. He believes it’s the next logical career step, having deliberately targeted Wetherspoon as the ideal firm to learn the ropes with as a manager before leasing with Belhaven.
Much of his confidence stems from the right people he has surrounded himself with at The Mercat, including Claire Allan, up and coming chef Jamie Gare and mum and dad Stuart and Anne. “I’m now at the point where I’m confident enough; I’ve got the support, I’ve got the business model that I’d be looking for,” Graham said. “I believe it wouldn’t be a problem to do it on my own.
“It’s actually finding the right unit, because the big guns have come in and paid over the odds for a lot of the pubs that are out there. The only pubs that are coming up on to the market are the ones that have really really failed.” Assuming the right outlet does come along, Graham’s track record to date suggests his confidence in himself and his team is not out of place.

Need to know »
GRAHAM BLAIKIE took his first steps as a tenant when he took on the Sportsman’s Bar in Musselbrugh in December 2004, having cut his teeth as a manager with JD Wetherspoon. He has leased The Mercat since September 2005.
NETWORKING via groups like the 49 Wine & Spirit Club, of which he is the current president, and the SLTA, is seen as a vital part of his business.
AWARDS have come in thick and fast in recent years. Successes include being named Radio Forth’s Bar and Restaurant of the Year.