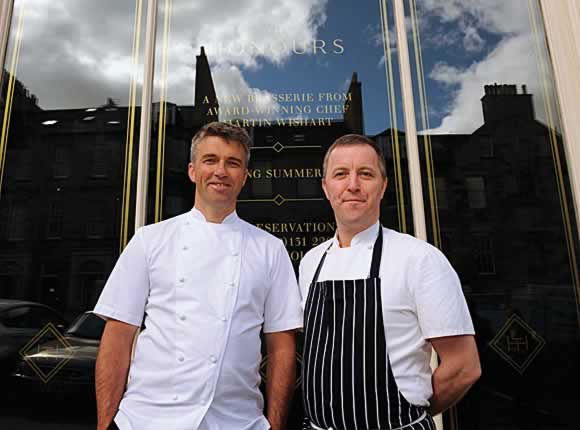 HE has plied his trade in some of the UK’s most celebrated kitchens, holds a Michelin star for his Leith restaurant, and was last year voted the best in the business by his peers. Martin Wishart has scaled the heights in a glittering culinary career. But he insists none of the acclaim matches the excitement he’s feeling as he prepares to launch his latest restaurant.
Wishart has linked up with friend and former colleague Paul Tamburrini, until recently executive chef at One Devonshire Gardens in Glasgow, to launch a new brasserie, The Honours, on the capital’s North Castle Street.

The important thing is we’ve pulled together the right management and put the right teams in place.

In culinary terms, the brasserie concept is a departure from the fine dining Wishart has perfected at his eponymous restaurants on Leith Shore and Cameron House, by Loch Lomond. It’s a style, however, which he is familiar with and excites both him and Tamburrini as chefs.
“I’ve spent a lot of my career working in some of the best kitchens in the UK, training in Michelin-star [restaurants], but I really enjoy eating and working in brasseries, too, albeit when it opens my time will still be spent in Leith,” he said. “It’s just exciting to have such a large menu to offer. As a chef, it opens up a lot more scope in what we put on as well.”
Between starters, pre-starters, main courses and desserts, The Honours could have as many as 60 dishes on the menu by the time it launches on July 7.
The menu will change every four months or so but only subtly, allowing chefs to cook with what’s in season. Prices will average £8 for a starter and £15 for a main course, with the food served in an environment that’s a bit noisier and “less formal” than the fine dining experience.
Diners can also expect quicker service, though not to the detriment of the quality of food or standard of service, Wishart insisted. “There’s less of a build up, it’s more off the cuff,” he said. “You can pop in and have a bowl of soup, a main course, a glass of wine and be out in 45 minutes. If you’re sitting in a brasserie as a customer, there’s a lot more buzz going around.”
While Edinburgh is well served by fine dining restaurants, Wishart feels there’s scope to develop a brasserie offer in the city. “The people involved in the fine dining market in Edinburgh at this level are all operating well and are doing things individually, which I think is why they’re successful,” he added. “I also feel there’s enough customers throughout the year to support them all.
“As a business, I see in the mid-market and brasseries an area that can be improved on. There’s a lot of business in that part of Edinburgh [North Castle Street], but we want to cast the net a little further and attract the public from Glasgow, Perth, Stirling and Aberdeen. They might be visiting the city for a weekend but it doesn’t mean they have to go to a fine dining restaurant to have a great meal.”
It’s not just the potential offered by brasserie-style food and service that’s exciting Wishart, though. He has relished the process of acquiring and upgrading the premises, as well as assembling a team who are as “passionate” about the project as he and Tamburrini are.
Two chefs have been “recruited straight out of college in the Borders”, while the front of house will be headed by Steven Spear, Wishart’s long standing senior manager. Wishart is convinced the team has the right blend of youth and experience.
“The important thing for me is that we’ve pulled together the right management and put in place the right teams front of house and in the kitchen,” he said. “We’ve given them the correct support and we spend a lot of time training. That’s why I say it’s the most exciting thing I’ve been involved in to date. Before, we didn’t have the luxury of time to do that. Now we’ve got a lot more knowledgeable staff, they’re all passionate about what they do and we’ve got a lot of young staff too. All these things combine to give great service to the customer.”
The building itself was acquired from the property arm of the Murray Group, which operated the renowned restaurant Cosmo from the premises before leasing it to chef and Oloroso founding partner Tony Singh, who ran it latterly as Tony’s Table.
At the time of writing, the scheduled eight to nine-week refurbishment, which has involved renovating the premises and visits to a stove manufacturer in France, was proceeding on track.
New ventilation had been installed in the kitchen, a new stone flooring was being laid and the kitchen equipment was due to arrive the following week.
Wishart and Tamburrini are due to get the keys tomorrow (June 24) and bookings are already being taken. “The whole process of taking it from a standing start to where we are now is stressful, but at the same time there are a lot of exciting parts as well,” he said.
Tamburrini, who met Wishart in the kitchens at The Balmoral in Edinburgh and followed him to his restaurant in Leith, is equally looking forward to the latest chapter in his career. The duo have been collaborating on recipe ideas in recent months and will bring the best of both of their suppliers to the table. Research carried out ahead of the launch has seen them visit Daniel Boulud’s acclaimed New York restaurants and Wolfgan Puck’s latest eatery in Singapore. “This is the next logical step for me,” Tamburrini said. “I’m trying to keep a lid on it. A lot of chefs have got to this point before and thought the hard work was done.”

FAST FACTS »
The Honours takes its name from Edinburgh and culinary history.
When famous novelist Sir Walter Scott lived at 39 North Castle Street, he is said to have uncovered the ‘honours of Scotland’ – the nation’s crown jewels , at Edinburgh Castle. The brasserie’s name is also inspired by a 19th century book on etiquette – The Honours of the Table.
Paul Tamburrini has cooked in some of Scotland’s best loved venues, including Rogano in Glasgow, Turnberry, and Cameron House by Loch Lomond. He has known Martin Wishart for 12 years.