THE cider industry continues to be a hotbed of innovation. In recent months, we have seen seasonal variants and new flavours added to established brands, including Bulmers No 17, Kopparberg raspberry & mint and St Helier pink pear cider, while newcomers have arrived in the shape of AB InBev, which threw its hat in the ring with Stella Artois Cidre, and Swedish brewer Spendrups with the UK launch of its Briska range.
The upshot is the UK cider market now boasts an unprecedented range of styles and flavours.
And it seems there could be more to come, with cider firms contacted by SLTN last week claiming there’s room for further innovation.
Davin Nugent, managing director of COS Brands, which distributes Swedish fruit cider Kopparberg, said growing consumer demand for new fruit ciders prompted the launch of its first seasonal variant Kopparberg raspberry & mint, which has joined the core range of pear, mixed fruit, strawberry & lime and elderflower & lime. “We’re conscious that the trade is not elastic,” he told SLTN. “They can’t take new variant after new variant and make them permanent. But there is growing demand from consumers for new ciders so there has to be a balance. “Seasonal variants are an easier way to do it and it puts less pressure on the bars for space.” 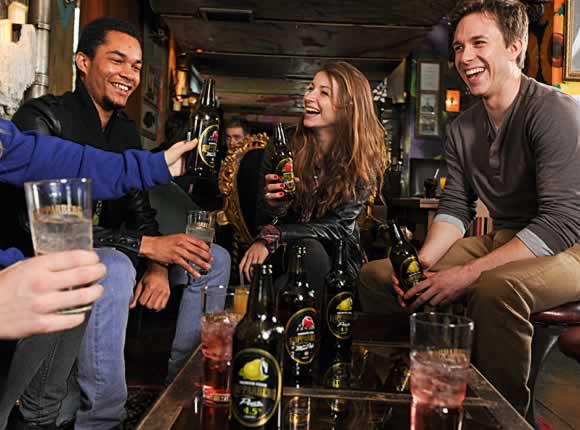 Demand for fruit ciders is said to have prompted the launch of Kopparberg’s first seasonal variant.

A seasonal strategy has also been adopted by Heineken UK. The firm launched limited edition Bulmers Crisp Blend earlier this year after last summer’s Summer Blend and Red Apple seasonal variants, which S&NPC operations director Ken McGown said sold “exceptionally well” across pubs in the Heineken-owned pubco’s estate. The firm also bolstered the core range with Bulmers No 17 – apple cider with crushed red berries and a shot of lime – last month.
Gareth Turner, the firm’s senior brand manager for premium cider, said the category offers scope for further expansion. “I don’t think it’s saturated,” he told SLTN. “Our research tells us that younger drinkers are seeking innovation and new flavours. We’re seeing a lot of growth in flavoured variants, which is why we launched No 17.”
Debs Carter, at WKD Core owner Beverage Brands, said brands that offer “something new and different” to consumers have helped develop the category. “Growth will come from making cider more accessible to all, and brands which blur the lines with the category’s traditional rustic image will fuel this development,” she said.
InterContinental Brands boss John Mills said consumers have gravitated towards premium flavoured ciders as the market has matured.
“Obviously we think pink is going to be big,” he said. “That’s why we chose this time to introduce new St Helier pink pear cider with its subtle fragrant aroma and crisp refreshing taste.”
Anthony Mills, head of European marketing for South African brand Savanna, agreed that the premium end of the market is driving interest in cider. “Consumers have embraced Savanna’s quirky proposition – a wedge of lemon in the neck of the bottle to add to its great taste,” he said.