RENOWNED Scottish chef Martin Wishart is to open a new restaurant in his hometown of Edinburgh next month. 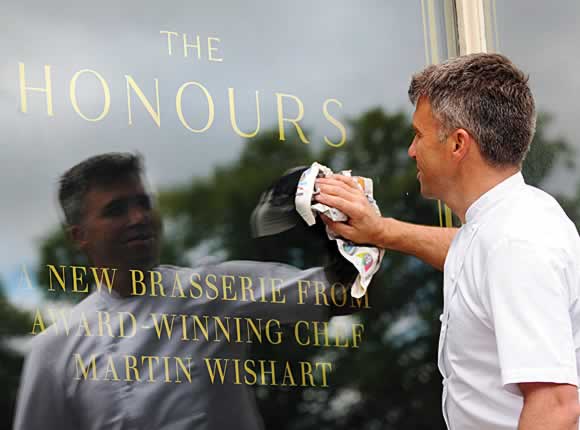 The new brasserie, called The Honours, is located on North Castle Street and due to open on Thursday July 7. While the menu has not been disclosed, Wishart revealed the food will be brasserie as opposed to fine dining in style, with pricing to match. The restaurant’s name makes two historical references.
One relates to the discovery of the Scottish crown jewels (The Honours) by Sir Walter Scott, a former Castle Street resident, and the other to an 18th century book titled The Honours of the Table. The book advised young people on correct table etiquette.
The Honours will be run by Wishart in conjunction with head chef Paul Tamburrini and front of house manager Steven Spear, who has worked with Wishart in his other restaurants. Wishart described the new brasserie as “the most exciting business venture” he has been involved with.
“Edinburgh is where I am from and I am delighted to be opening a contemporary brasserie in the new town, in interpretation of the Parisian classic – a restaurant where traditional French cuisine meets the flavours of the Scottish market,” he explained.
Wishart also owns the Michelin-starred Restaurant Martin Wishart, in Leith, Martin Wishart at Loch Lomond, which is based in the Cameron House Hotel, and the Martin Wishart Cook School in Leith.