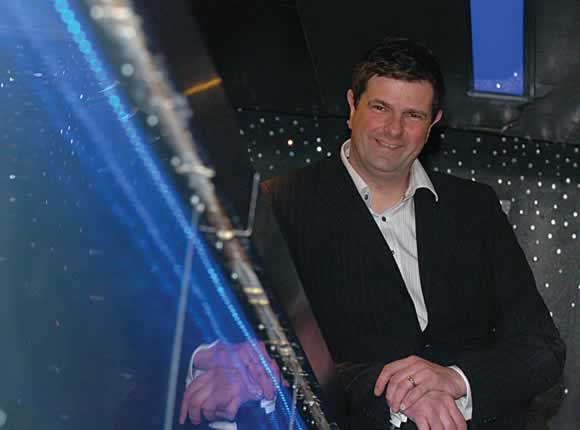 CHANGING the name of a venue that’s been a fixture of a city’s going out scene for more than 30 years sounds like a risky strategy.

It explains why the owners of Glasgow venue Victoria’s toyed with the idea of retaining the name they already reinstated when they bought the then Studio club in 2008. But Wayne Gardner-Young and Volker Steinemann ultimately decided a new name was needed to reflect the club’s new look; and settled on Azure – a subtle reference to the Fontaine Bleu restaurant that was once part of the entertainment venue.
The very fact the two had added a nightclub to WGY Group’s leisure portfolio, which includes the Buchanan Arms Hotel in Drymen and the Kaim Hotel in Bathgate, surprised even them. Gardner-Young and Steinemann were on the lookout for a site for a new hotel when they came across the Sauchiehall Street building, which met their requirements in terms of location and size.
With an initial plan to close the club and transform the building into a hotel, the business partners soon changed their minds after trading the venue for a couple of weeks. “We didn’t think a club fitted with the hotel plan before we took over,” Steinemann told SLTN. “The plan was to run Studio, which we had taken back to its original name, Victoria’s, for a year or so to give us time to sort out the hotel. But we saw the figures and quickly realised this could be something.”
Changing their business model accordingly, Steinemann and Gardner-Young set out to create a hybrid venue that would incorporate a club into the hotel plan. The final piece of the jigsaw slotted into place 18 months ago when the adjacent five-storey building was acquired, with WGY Group going on to secure planning permission for a hotel late last year.
Work then got underway on the refurbishment of the two-roomed club earlier this year, which was carried out in stages so the business could continue to trade and included some preparatory work for the forthcoming accommodation business.
Opting to manage the project themselves using the building arm of WGY Group, Steinemann sought design inspiration from clubs in his native Germany and other parts of Europe.
Acknowledging that consumers’ clubbing expectations have evolved, the aim was to create different ‘zones’ within Azure.
One of the two club rooms has been given a “loungey” feel with the creation of raised seating areas furnished with large cream sofas, throne-style chairs and red heart-shaped stools around low ‘glitter ball’ tables, which are lit inside and can be set to change colour.
Lighting was also plays a role in the design of the bar, with the ability to change the colour of the frontage; there’s also a “bedazzled” wall decorated with hundreds of crystals. 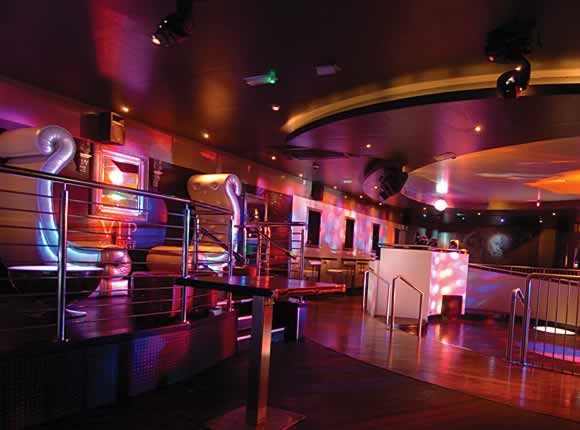 Although the room features a small dance floor, there are more seating areas, including a section with high tables and white leather seats, and a further area kitted out with sofas and low tables. The second room is pitched squarely at clubbers who want to dance. It’s dominated by a ten by three metre LED light wall, which accounted for £70,000 of the £280k spend and can be set to thousands of different light combinations.
Steinemann said the feature, which is claimed to be the only one in Scotland and one of four in the UK, has given Azure a point of difference over its rivals – in his view a vital factor in the current economic climate. But he was quick to stress the club’s relaunch is about more than the interior.
A new marketing strategy is in place, bolstering traditional methods with social networking activity and email marketing. Azure has also attracted a number of high profile acts across different musical genres, including hip-hop group N Dubz for the official launch party on April 21 and Belgian dance act Ian Van Dahl late last month. The club also runs special events, like Ladies’ Nights.
The combined effect of the changes appears to be paying dividends for the 800-capacity club. And, with work scheduled to start on the 102-bedroom hotel, which will cost a claimed £3.7m to complete, in January, Steinemann is confident the business has a prosperous future.
So does he have any regrets over he and Gardner-Young’s unplanned entry into the nightclub business? And, more importantly, at their decision to ditch the Victoria’s name? “Not at all,” he said. “The people that used to love Victoria’s are now in their 40s and 50s; people in their 20s have no reference to the name. For a while we thought about keeping Victoria’s but we wanted to move it on. Azure has done that but it also refers to Victoria’s history. The club is running well and I think with the hotel it can only add to the business.”