Warm weather could help food sales, but the offer needs to be right

THE influence of the weather on pub food sales should not be under-estimated, it seems.

The latest Coffer Peach Business Tracker, which monitors sales trends in pub and restaurant groups, found the warmer weather which the country enjoyed over the April bank holidays had boosted ‘out of home’ eating and drinking across the UK. Clearly, operators across Scotland will be hoping to enjoy a similar boost in trade during the months ahead.
However, the report also revealed that summer sun can be a double-edged sword, as consumers decide between eating out and firing up the barbecue in the back garden. The challenge for operators, therefore, is to ensure they offer the right dishes to whet summer appetites.
That’s certainly the approach taken at the Four Seasons Hotel in Perthshire.
The hotel changes its restaurant menu four times a year and while there are certain dishes customers can expect year-round (like Scottish beef and salmon), head chef Peter Woods told SLTN it’s important to keep things fresh. Subsequently, the Four Seasons’ summer menu will major in seasonal produce, from vegetables like asparagus and broad beans to meat like lamb and venison. Fresh shellfish and seasonal fruit will also feature. 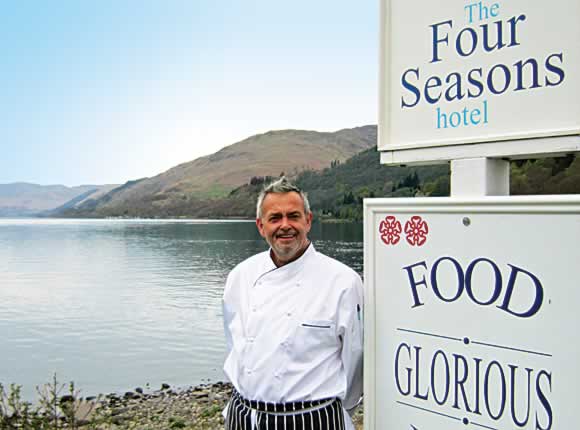 “When people think of venison they think of winter, but roebucks have come in during the last six or seven weeks and the venison meat is really good at the minute,” Peter said. “It’s a summer dish because that’s when it’s available.” Key to acquiring the best seasonal produce is keeping in constant contact with suppliers, sometimes every day. “I rely on my suppliers telling me what’s coming in,” Peter explained. “The fishmonger can tell us what’s coming in before it’s even in, because the skippers [on the fishing boats] email the base and tell them what they’re going to be landing.”
Yet according to the chef consumers aren’t generally aware when foods are in season these days. “I think a lot of people nowadays don’t actually think seasonally,” he said. “Not many people cook seasonally and eat seasonally at home, because most people shop at supermarkets now, unfortunately, and everything is there every day of the year, whereas if you’re using local suppliers you probably can’t get everything all the time so you use what’s available. People have lost (that knowledge) I think.”
Not everyone agrees on this point though. Laurie Newlands, head chef at The Inn at Kippen, reckons her customers are switched on to what’s in season. “I think they’re much more knowledgeable about things now and so they do expect to see [seasonal produce],” she said. “They know it’s all fresh food that we have here. We’re not like the [big pub] groups, with their frozen food.”
The Inn does not operate a set menu, giving Laurie the freedom to respond to whichever produce is fresh; the dishes can change from day to day.
“It’s quite good, because we don’t have a static menu we don’t have to hold lots of stock,” she said. “A lot of places run with full menus and on a Monday they’ll have to have everything that’s on there, whereas we can shorten the menu at the beginning of the week when it’s quiet and then add things to it for the weekend.”
Newlands said the inn’s summer dishes are lighter than its winter courses, making use of citrus-based sauces and spring vegetables such as asparagus and pea shoots as well as the famous Jersey Royal potatoes. Laurie advised opting for lighter dishes in summer – whether the sun comes out or not. “The weather’s not as cold anyway, even if it’s raining,” she said. “I feel myself that I don’t want to eat heavier things in the summer, so we do tend to keep it a lot lighter – salads and things like that.”
Offering fresh, seasonal food is one way to convince customers to eat out instead of turning to the barbecue, but another solution could be for pubs to save diners the trouble and fire up the barbecue themselves.
Catering equipment supplier RH Hall has advised operators to approach barbecue equipment in the same way that they would any commercial kitchen, considering how many covers the outlet will be looking to serve and what equipment will be needed. “What is the true cost of ownership?” asked Ray Hall, managing director of RH Hall. “A domestic barbecue may seem a cheaper option but it will not last and will often be unsuitable for the amount of food you need to cook.”