OPERATORS in one of Glasgow’s busiest streets say trade has slumped after part of the road was closed more than three months ago following a fire. Bar and club owners have slammed the lengthy closure of Sauchiehall Street, between Charing Cross and Elmbank Street, which came into force after the blaze on February 8 and was still in place as SLTN went to press. 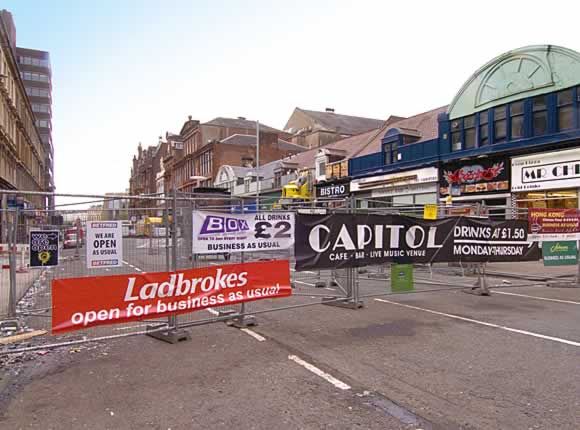 Many of the affected bars and clubs have invested in ‘business as usual’ signs in a bid to attract customers.

Last week there was still no indication when the section of road was likely to re-open. Glasgow City Council confirmed it issued a dangerous building notice to the owners of the property on April 26, which gives six weeks (until June 7) to start work to either repair or demolish the building.
But operators say the timescale has already hampered trade and affected deliveries – and fear a prolonged closure could cripple business.
Donald MacLeod, who owns The Garage nightclub, told SLTN he has upped his spend on marketing activity for the venue since the section of road was closed. But he said the closure and traffic diversions have made it difficult for taxis to reach some venues; he wants a temporary taxi rank to be set up at the Charing Cross end of Sauchiehall Street if the situation continues.
“The road closure is a nightmare,” MacLeod told SLTN last week. “Pickings are sparse enough as it is. It’s an absolute disgrace that a main artery has been shut for this long and could be shut even longer, especially if the building has to be demolished. How is it that after the most tragic of events on the other side of the world, a massive rebuilding exercise is underway within 48 hours, yet a fire in a building here means a main artery is closed for more than three months? It has impacted on our business; we’re down about 20%. We’ve put up signs and posters where the road is blocked off and we’re spending more and doing more to get people in. Regulars know we are still open but for people visiting Glasgow, the barriers make it look like it’s not open for business. It’s a disgrace it’s been like this for so long. I think all of the businesses are suffering badly but we’ve got to wait until we hear the fate of the building and take it from there.”
Linda Darby, manager of the Mint Casino, described the situation as “very frustrating”. She told SLTN the casino, which is part of the Genting Casinos group, has employed a security guard to man the barrier at the Charing Cross end of the street to allow deliveries easier access. But she said the three-month closure has impacted on the number of people coming into the area. “Attendances have been affected,” she told SLTN.
“We get a lot of business from people who have been at the King’s Theatre for example, but [at the Charing Cross end] it looks as though the road is closed completely. People don’t realise there’s a diversion and they can turn. I also had to phone our suppliers to tell them they can still get in. I fully understand that it had to be closed from a health and safety point of view, but the length of time it has been closed has affected the businesses in the area.”
Campus owner Carlo Citti agreed the road closure had impacted on the number of people coming into the area. “Sauchiehall Street has been quieter since the road closed,” he said. “And there’s no indication when it will be sorted.”
Glasgow City Council said it issued a dangerous building notice on April 26, stating that the building must be repaired or demolished.
“This [notice] gives them six weeks to commence work,” said a council spokeswoman. “Until we know what their proposed repair scheme is we can’t open the road. It’s not safe.”