SCOTLAND’S hospitality industry would benefit greatly from its own dedicated hospitality school, one of the latest winners of the HIT Scotland/SLTN scholarships has claimed.

Scott McCartney, bar and restaurant manager at the Apex Waterloo in Edinburgh, won the SLTN-sponsored middle-management scholarship earlier this year at the HIT Scotland Emerging Talent Conference. It was one of two scholarships sponsored by the paper, and follows two awarded in partnership with HIT last year. 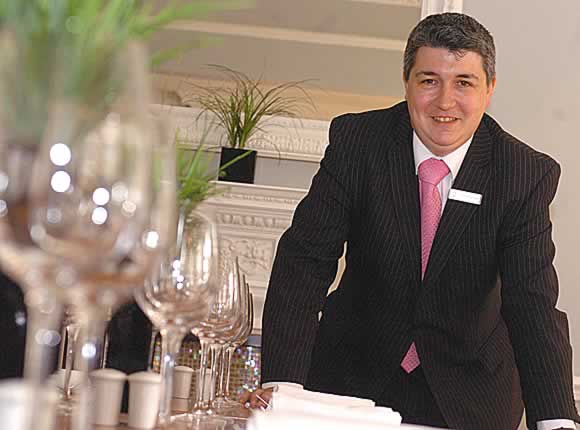 Scott McCartney reckons more businesses should forge links with the school in Lausanne.

As part of his prize, McCartney spent three days earlier this month at Ecole hoteliere de Lausanne, the esteemed hospitality institute in Switzerland, along with professionals from different Scottish companies. And the experience convinced him the Scottish hospitality industry would be hugely boosted if a similar school was set up here.
“I feel it would take a massive shift in hospitality companies’ way of thinking to back a school that provides all the skills, instead of being solely reliant on [graduates with] degrees from universities that don’t have training kitchens and restaurants,” McCartney said on his return to Scotland. “But I feel if we have one such school within Scotland, the product we would be delivering would increase tenfold and allow the current hotel companies an increase in profit.”
McCartney also reckons Scotland’s universities and businesses should consider forging stronger ties with the school in Lausanne to provide more young professionals with scholarships.
Before heading to Switzerland, McCartney told SLTN he hoped the scholarship would teach him management techniques that would stand him in good stead as his career progresses. He said he hoped to gain confidence and develop some of the skills needed to allow him to work towards other management roles.
And it seems he wasn’t disappointed.“I feel I learnt a lot about myself and the way I manage my team, how I am responsible for navigating my team, how to develop and coach a team and the different styles that work,” he said. “My most important lesson is your team is like a pack of wolves, everybody has a place in the team and nobody should be undervalued in the role they play.”
McCartney has worked in the hospitality industry since high school, when he took a part-time job at his local pub – the Horseshoe Inn in Eddleston. Despite studying sports coaching at college, he realised he liked hospitality more and decided to stick with the business full time.
He has since worked in manager and assistant manager roles for a number of companies, including Dalhousie Castle and Spa and Macdonald Hotels, which included stints at the company’s Houstoun House and Marine Hotel properties. The middle-management scholarship was one of 110 were handed out at this year’s conference, from more than 300 applications.