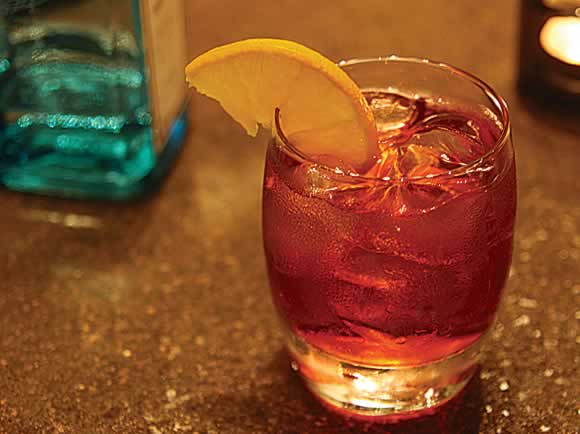 Dinu Li, head of operations at Oriental fusion restaurant Opium, on Hope Street, said summer cocktails should be “cooling, sweet and tart with a kick to arouse the senses”.
The venue, which specialises in dim sum, is promoting three summer cocktails in the coming weeks: a Negroni, a Mojito and a Pimm’s Cup. The Negroni combines 25ml of Bombay Sapphire gin with equal measures of Martini Rosso and Campari. The aperitif is served over ice in an old fashioned glass garnished with an orange slice.
A staple of many cocktail menus, the Mojito includes Bacardi Superior rum, lime wedges, sugar and mint muddled and topped with soda; while Opium’s Pimm’s Cup mixes Pimm’s No 1 with lemonade, mint, cucumber, oranges and strawberries.
Li said the restaurant is offering the Pimm’s Cup as a single-serve drink and in a pitcher for larger groups to share.
“We will be promoting three delicious cocktails for the coming weeks: a perfect stimulating aperitif in the form of the Negroni, which is a shorter drink; the Mojito, which is extremely refreshing and is a traditional Cuban highball drink; and the classic British summer drink, the Pimm’s Cup, which is not listed on our cocktail list so it’s a fun surprise and a firm favourite with tennis fans,” he said.
Opium’s regular cocktail list features a selection of five classic and five contemporary cocktails, as well as five of its own creations. These include the Shanghai Night (Bombay Sapphire gin, fresh watermelon and lemon juice, Aperol and pomegranate syrup) and the Oriental Mandarini – Bacardi Superior rum shaken with a wedge of orange, marmalade and Mandarine Napoleon liqueur with a spoonful of honey and Lapsang Souchong tea.
Meanwhile, the Suntory UK brand ambassador is promoting a summer cocktail using Japanese whiskey Yamazaki 12 year old as a base.
One of a series of cocktails based on the 24 ‘mini’ seasons of the year which the Japanese traditionally celebrate, the Yummy Yamazaki Highball (50ml Yamazaki 12 year old topped with ginger ale and a twist of orange peel or mint) is described as a “long, cooling drink”. Simplicity is key to summer cocktails, according to Suntory. Drinks should be “easy to make, not time consuming and with ready-to-hand seasonal ingredients”, it said.