IT’S been a bartender favourite for a some time, thanks to the versaility and varied characterisitcs of the many specialist products on the market.

Now rum seems to be extending its appeal on the other side of the bar. Jamie MacDonald, owner of The Raconteur in Edinburgh’s Stockbridge, and Fraser McIlwraith, bar manager at Buzzworks Holdings, whose venues include Elliots in Prestwick, told SLTN that interest in the category has been growing in recent years, with consumers increasingly willing to try new brands and styles.
Jamie said spiced rum Sailor Jerry has “bolstered the whole market”, while Fraser reckons the brand, together with fellow spiced rum The Kraken, is attracting more women to the category. “Sailor Jerry and [The] Kraken rum have made rum attractive to the female market, which in turn has led this market to explore the other rums out there,” he said. Cocktails are also credited with helping broaden rum’s appeal.
Buzzworks stocks around 20 rums in each of its venues, with the range spanning Bacardi, [Captain] Morgan’s Spiced and Sailor Jerry, as well as a selection of light, dark and aged rums. Fraser said more than half of the rum sold across the group is through Mojito and Daiquiri cocktails. “We sell around 1000 rum cocktails a week,” he said. “After that it’s with Coke and a squeeze of lime.”
Although he hasn’t spotted too many rum connoisseurs on the other side of the bar, Fraser reckons the knowledge bartenders possess is gradually filtering through to drinkers. “The only ones really in the know are the bartenders themselves,” he added. “Customers are getting better, though, and they will brand call rums confidently now.” 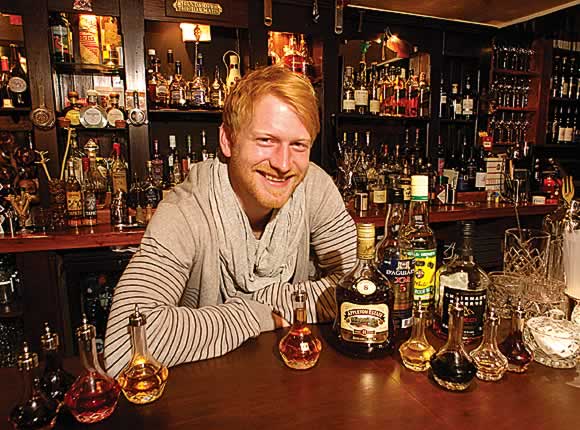 It’s a point developed by Caroline Smith, co-owner of The Brass Monkey in Glasgow. Suggesting rum is a category “that does attract connoisseurs”, she told SLTN bartenders have a key role to play in the development of consumer knowledge about the category. “Consumers seem to be starting to learn more about rums, especially premium ones,” Caroline said. “Interestingly, we find that people are asking for more of the unusual rums by name. Where people lack knowledge of a product [and] if bar staff are aware of its production methods, provenance and are able to sell the product confidently, then the customer is more likely to sample. The more information provided, the more ‘real’ something becomes and the more people are intrigued and want to try it.”
The importance of knowledgeable staff to promoting different ways to enjoy rum and ultimately increasing rum sales was acknowledged by Fraser and Jamie. At The Raconteur, Jamie said staff are trained on the 36 different rums stocked, which include Demerara, vintage and spiced rums, giving them the skills to recommend brands depending on consumers’ tastes.
He said the bar’s customers are fairly open-minded when it comes to trying new products and are keen to taste the flavour of the spirit, rather than disguising it with mixers. “We get a lot of young professionals who come in and want something to sip, rather than just [drink rum with] Coca-Cola or ginger ale and mixing it across the board,” he said. “They actually want to try the product.”
The appetite for more flavoursome rums doesn’t seem to have been diminished by the economic downturn either. In fact, Jamie said the challenging economic climate has actually helped increase demand for stronger-tasting premium brands.
As well as straight serves, The Raconteur also offers a number of rum-based cocktails designed to “complement the flavour of the rum rather than trying to dilute it or mask it. We use a lot of vermouths and sherries to complement the spirit, and try not to make them overly sweet,” he explained. “We try to give them a dryer palate, in a sense making the cocktail sort of medicinal, as it was in the olden days, but we think they’re a lot more enjoyable.”
Although The Raconteur majors in speciality rums, the range also includes well-known brands like Bacardi and Sailor Jerry. “I think people thought that we wouldn’t stock these kinds of products when we opened, but I don’t see why we shouldn’t,” Jamie added. “I always remember working in a bar when a gentleman came in and wanted Bacardi and the bartender sort of stuck his nose up at him. That’s not what we’re about.”