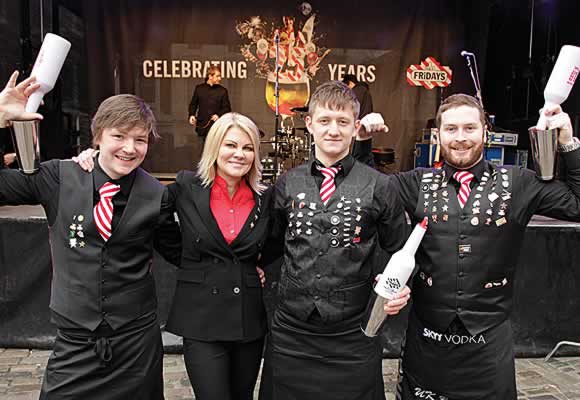 Staff from venues in Aberdeen and Glasgow were among more than 100 TGI bartenders from across the UK taking part in the ‘most people simultaneously cocktail flairing’ record attempt.
Participating bartenders completed a co-ordinated two-minute routine without dropping a bottle and Guinness World Record officials confirmed a new record had been set.
Michael Allan and Martin Kinda from TGI Friday’s in Queens Link Leisure Park, Aberdeen, and Adam Friend from the recently-opened outlet at the city’s Union Square, were among the 101 bartenders who set the new record.
Adam, who is the current TGI Friday’s UK Bartender Champion, described it as a “brilliant day”.
“To be part of a Guinness World Record is absolutely incredible and I was truly amazed by the spirit and energy of everyone involved,” he said.
“We just all worked together to achieve the record and when the results were announced, I was truly elated.”
Karen Forrester, TGI Friday’s UK managing director, said the bartenders showed “passion and talent”.
“This is a year of celebration for Friday’s and what better way to start it than with a fantastic spectacle and achievement like this,” she said.
“And we’ve got more to come, from a special 25th cocktail to delicious new food and drink which will be introduced to our restaurants in April.
“We want everyone to share our celebrations with us and have as much fun as we are in this momentous year.”