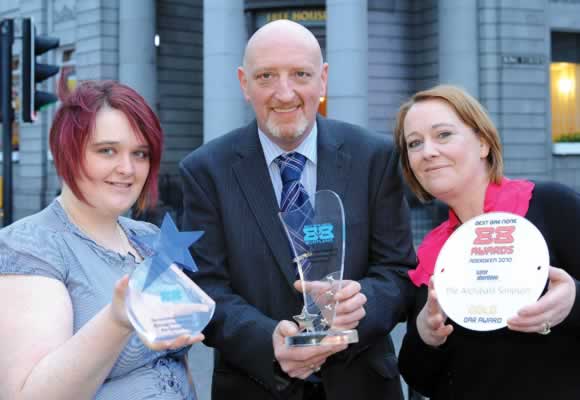 North east venues sweep the board at inaugural Scotland-wide awards

NORTH east venues swept the board at the inaugural Best Bar None Scotland Awards.

Outlets in Dundee took three of the four top awards in the first nationwide contest, which saw 30 winning venues from the regional Best Bar None initiatives go head to head in four categories.
Tickety Boo’s in Dundee beat competition from ten other outlets across the country to take the Best Bar None Scotland title in the pub category; Fat Sams, also in Dundee, came out on top in the nightclub category; and the city’s Abertay Student Centre took the Best Bar None Scotland award for specialist entertainment venues.
The other big winner was JD Wetherspoon’s The Archibald Simpson in Aberdeen, which took the top award in the bar category. Each of the 30 finalists received an award for reaching the national final.
Best Bar None, which is backed by Diageo and the Scottish Government and seeks to recognise best practice, has accredited 1192 venues across Scotland in the seven years the scheme has been running.
Premises are assessed on safety policies and crime prevention measures and must demonstrate their commitment to the five licensing objectives – preventing crime and disorder, securing public safety, preventing public nuisance, protecting and improving public health and protecting children from harm – to achieve accreditation.
Speaking at the inaugural Best Bar None Scotland Awards, which took place at the Apex City Quay Hotel & Spa in Dundee, justice secretary Kenny MacAskill praised the efforts of operators.
“We recognise that changing Scotland’s long standing drinking patterns cannot be achieved by the government alone,” he said.
“It requires a concerted effort by everyone and accreditation schemes such as Best Bar None, which is exactly the kind of initiative we want to encourage and are delighted to promote and support. It is wonderful to see the people working so hard to make our communities safer in our clubs, pubs and bars being recognised tonight at the national awards.”
Mark Baird, Diageo’s corporate social responsibility manager, said operators play a “crucial role” in helping make Scotland’s town and city centres safer.
“At Diageo that is what we also want to see and that is why we are delighted to support this scheme and to encourage publicans and club owners to play an active role in making public safety a priority,” he said.
Alan Dobie, of the Scottish Business Crime Centre, which organises Best Bar None, said Diageo’s support of the scheme had been “vital” to its success.
“The work and effort which is being put into tackling crime and anti-social behaviour by Scotland’s bars, pubs and clubs is fantastic and deserves recognition,” he said.
“I’m particularly pleased the efforts of the people who run these premises are now being recognised at a national level.”

(above: The Archibald Simpson’s manager Alec Beattie with his wife, kitchen manager Caroline, and daughter, shift manager Stephanie Leask, and the awards.)