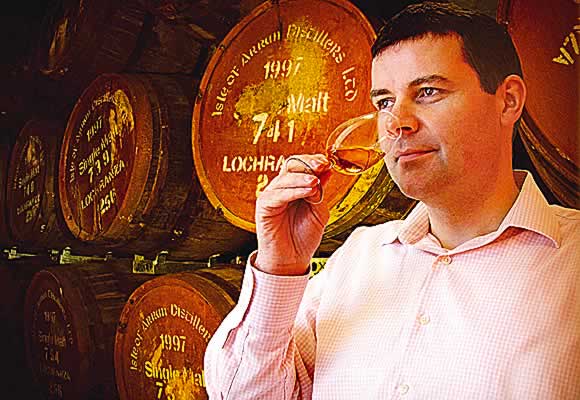 WHISKY exports brought in £109 a second last year as the value of Scotch shipped abroad soared to a record high.

Global shipments topped £3.45 billion last year – a 10% increase in the value of whisky exported the previous year, according to figures published by the Scotch Whisky Association (SWA). Despite the growth in the value of shipments, the volume of whisky exported last year fell 2% to 1.06bn bottles – a shift the SWA said reflects the “continued premiumisation” across the sector.
Single malt was said to have enjoyed strong growth last year, as exports jumped 18% to £577 million, while the value of blended Scotch shipped overseas rose 5% to £2.6bn.
The USA remained Scotch’s largest export market, up 19% to £499m last year.
Exports to the EU as a whole remained flat at £1.26bn.
While the value of Scotch shipped to France rose 4% to £422m last year, “difficult” markets in Greece (-26% to £97m) and Spain (-15% to £268m) had a negative effect on the overall performance. The ‘BRIC’ (Brazil, Russia, India and China) markets are said to have continued to develop.
SWA chief Gavin Hewitt said distillers are playing a “key role in export-led recovery”.
Meanwhile a group of seven distillers have joined forces to produce a whisky to raise money for the disaster relief effort in Japan.
The brainchild of Isle of Arran Distillers’ boss Euan Mitchell, Spirit of Unity blends single malt from each of the distilleries: Arran, BenRiach, Bladnoch, GlenDronach, Mitchell’s Glengyle, Kilchoman and Springbank.
“Not a penny of profit will be taken from this project by any of the parties involved,” Mitchell said.

(Image: Spirit of Unity was the brainchild of Isle of Arran Distillers boss Euan Mitchell.)