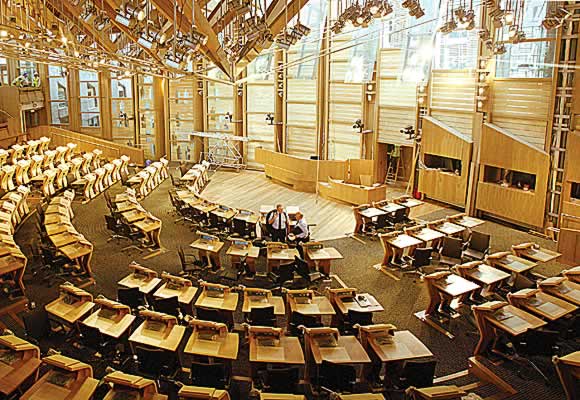 Three of the four main parties have outlined their plans for tourism, alcohol and licensing, but pubs don’t need any more red tape

THE campaign for the 2011 Scottish elections moved into a significant phase last week as three of the country’s four main political parties unveiled their manifestos, outlining their plans for tourism, licensing and Scotland’s ‘alcohol issue’.
At first glance, no party seems to be proposing further, sweeping change for our sector, which is no bad thing.
The past two administrations at Holyrood have served up enough regulation in recent years to keep operators busy for at least a generation.
That’s not to say there is no evidence of imaginative thinking in the documents.
One positive example is a pledge by the Scottish Tories to look at changing the way licence fees are calculated, from the current system based on rateable values to one linked to alcohol turnover.
This, I imagine, will win support from the many independent publicans who, through the SLTA, have argued long and weary that the fees paid by supermarkets should better reflect their status as the major vendors of alcohol in Scotland.
Likewise, parts of the trade may well welcome the Tories’ commitment to extend the scope of rural business rates relief.
The Conservatives have also pledged action on alcohol pricing, falling into line with the coalition down south with a proposed ban on the sale of alcohol below the cost of duty and VAT.
For supporters of minimum pricing, this is unlikely to go far enough, as it would still seem to give supermarkets the scope to discount heavily on alcohol.
But those of an optimistic outlook might view it as a form of minimum pricing: it’s got to start somewhere, after all.
Scottish Labour, whose campaign to date has been beset by the failure of leader Iain Gray to connect with the general public, is offering something operators might like the sound of, too. It comes in the shape of a pledge to revalue non-domestic properties more often the current five years, with a promise of transition relief with each revaulation.
If the experience of the 2010 revaluation is anything to go by, pub owners may well welcome the prospect of their rates more accurately reflecting the prevailing economic conditions.
When assessors handled the 2010 revaluation, the tone date used was April 1, 2008 – some months before the extent of the economic downturn and impact on the property market became apparent.
That left many pubs facing significant hikes in rates at the depths of the recession.
Other Labour proposals seem less likely to please the trade.
The prospect of a National Strategy for Action on Alcohol is enough to send a chill down the spines of lobbyists whose lives have passed before them as one initiative after another has been published, debated and consulted on in recent years. What’s needed now isn’t another strategy, but time to allow the raft of regulations recently introduced, via the Licensing and Alcohol Acts, to bed in.
Labour also talks about giving licensing forums the right to petition local authorities to ‘end 24-hour licensing where problems arise’. But, to my knowledge, the country isn’t exactly awash with premises which fall into that category.
The Lib Dems, meanwhile, have VisitScotland in their sights.
Tavish Scott and co want to see the marketing agency and another quango, Scottish Development International, scrapped and replaced by a new body. Scotland International would take on the VS responsibility of promoting not just tourism but Scotland generally around the globe.
It’s the second time VS has faced a call to be axed this year, after a respected economic think-tank, the Fraser of Allander Institute, said the model doesn’t work and doesn’t merit government funding.
Amid the current clamour for cuts, and with VS said to receive some £50 million in government funding, it’s easy to see why such a move might be contemplated. But it surely would have to be matched with safeguards to ensure tourism – one of Scotland’s most important sectors and one inextricably linked to pubs – continues to thrive.
The SNP had still to publish its manifesto as SLTN went to press, though it has previously indicated that it will again try to introduce minimum pricing.
On the balance of what we have seen so far, it’s clear that alcohol, tourism and licensing will continue to be political issues not matter who is elected. Whether that is good for the trade remains to be seen.

Top image: 129 seats at Holyrood are up for grabs.