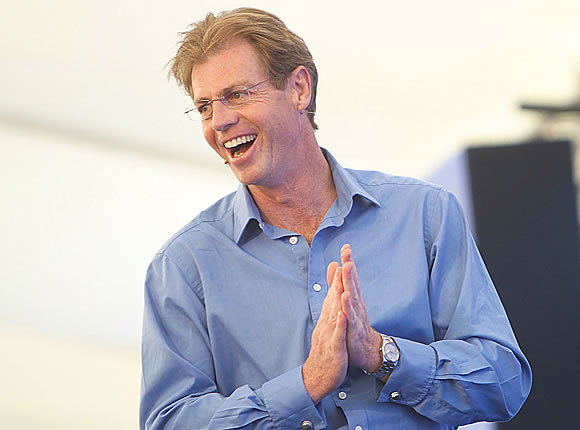 The Budget handed the drinks industry another problem, but Diageo GB boss Simon Litherland tells Scott Wright there are still reasons to be positive

THE boss of Diageo GB wasn’t surprised when chancellor George Osborne confirmed the coalition’s position on alcohol duty last month. That is not to suggest Simon Litherland, who succeeded Benet Slay in the summer of 2009, was pleased to see another 54p of duty being slapped on a bottle of Gordon’s, Bell’s and Smirnoff.
Diageo has long campaigned for reform of the current system, believing that all alcohol should attract the same rate of duty per unit.
In its view, the successive duty rates presided over by the past two governments – Litherland says tax on alcohol has risen by as much as 30% over the last three years – have undermined earnings, put jobs at risk and hit consumers in the pocket.
It’s now of the opinion that duty is so high it’s starting to bring in less revenue for the Treasury.
That said, Litherland said he “anticipated” the stance taken by the coalition in last month’s Budget, given the state of the nation’s finances.
“It’s very difficult because, historically, increasing tax on alcohol has been one of the ways government has raised revenue,” he said in an interview with SLTN.
“I think they [the government] are well aware of the impact on jobs – we play our role, along with other members of the industry, in bringing it to their attention – and of the challenges the on-trade has been facing.
“Yet they have a need to fill the coffers, and duty on alcohol is one of those places they have always tended to go.”
Conscious though Diageo is of the UK’s budget deficit, Litherland insists duty reform will remain a key priority going forward. He is also broadly supportive of calls for a VAT reduction for pubs, hotels and restaurants, as advocated by Wetherspoon boss Tim Martin.
“It’s fair to say our position on excise duty holds and is a long-term objective,” he said.
“We believe alcohol is alcohol, and that people should pay the same tax per unit of alcohol.
“But at the current time, this isn’t the coalition government’s tax policy of choice. I think it’s also fair to say the current escalator is unfair and will impact on revenues negatively, so we will continue to focus on asking for a freeze on spirits duty, alongside those arguing for a freeze on wine.”
Duty isn’t the only impediment to growth Diageo faces in the UK. When it posted results for the second half of 2010 in February, it alluded to “challenging” trading conditions, including the continuing shift in drinking patterns from the on to the off-trade, as it revealed a sales rise of 1% in the six month period.
Two flagship brands seemed to find the going tough, but it seems there were mitigating factors. Sales of Smirnoff, the UK’s top selling spirit, fell by 16%, though Litherland said this was largely because customers had stock-piled cases towards the end of its previous financial year. That was ahead of an anticipated duty rise in June, which didn’t materialise.
Guinness also had a hard time in the half-year compared to a previous six months which included a World Cup – always good for beer sales. Pub closures, estimated by the British Beer & Pub Association to be occurring at a rate of 29 per week across the UK, were also thought to have hit sales.
However, since the start of the year, both brands are reckoned to have recovered, Smirnoff regaining the share it lost and the ‘black stuff’ boosted by its association with Six Nations rugby and St Patrick’s Day.
Moreover, Litherland insisted that Diageo’s performance in the second half of last year was actually pleasing when set against the wider UK alcohol market, with plenty to celebrate in wine and premium spirits.
Reserve Brands, Diageo’s premium and super-premium spirits division, which includes Tanqueray gin and Ketel One vodka, is growing at a rate of “35% plus year on year” amid what continue to be unfavourable conditions.
“What we’re seeing is people going out less often to the on-trade, but when they do they’re happy to trade up,” he said.
“It’s a great opportunity for the on-trade retailer to ‘premiumise’ and ensure people get a great quality experience with quality brands and quality serves.”
Likewise, Litherland is sanguine about Diageo’s prospects on wine, where its interests span Blossom Hill, which it handles via Percy Fox, Justerini & Brookes, and agency work.
“The other big growth area for us has been wine, which is delivering strong sales growth as well as great margin improvement, which for a wine business is really important,” he said. “The Blossom Hill range continues to go from strength to strength.
“Some of our agency brands are also doing well, the likes of Arniston Bay and Yellow Tail, which have still got great potential to grow.
“Our Justerini & Brooks business, which is our fine wine brokerage, is having a fantastic time, with some great en primeur campaigns and the quality of wines coming through.
“We’re quite excited about that and the opportunities that presents in the international market as well.”
Closer to home, Litherland does not anticipate life will get easier for the on-trade at any time soon. He expects pubs to continue to close, though is confident that the closure rate will continue to slow.
His advice for operators is to do all they can to enhance the experience for the consumers they attract, insisting that Diageo is on hand to provide support should they need it.
“What is apt to do is create value for our customers and ourselves, both in the on-trade and the off-trade,” Litherland said.
“And I think through some of the events we help create with some of our brands we can stimulate footfall in the on-trade.
“We can support the on-trade with our quality team, making sure drinkers are consuming quality Guinness, and we can help with ideas about how to increase profitability and the opportunity behind long mixed drinks. I believe there’s lots we can do within our brands to support customers.”

Born and educated in Zimbabwe, Simon Litherland graduated as a chartered accountant from the University of Cape Town.

He joined the firm now called Diageo from Pillsbury UK in 1992.

Since then he has held several senior roles, including finance director of IDV Central Europe at the time of the Grandmet and Guinness merger in 1997, general manager of Diageo Czech Republic and Slovakia, and MD of Baileys Supply in Dublin.

Before succeeding Benet Slay at Diageo in 2009, he spent five years as managing director of Brandhouse South Africa, a joint venture between Diageo, Heineken and Namibia Breweries Limited.