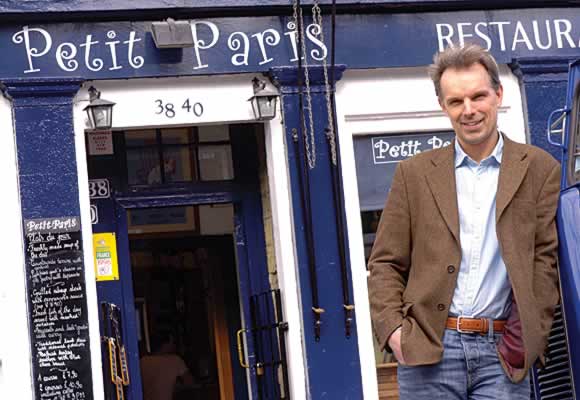 STEPPING in to Petit Paris is like taking a trip back in time – to 1930s France, to be precise. Nods to traditional Parisian cafe culture abound the Edinburgh restaurant, from the Tricolore gingham tablecloths and vintage posters to the chalkboard flagging up ‘la plat du jour’.
Even the staff converse in French – a mandatory requirement – leaving this correspondent wishing she had stuck in a little harder at school.
This homage to pre-war Paris has served owner Philippe Bachelet well in 13 years at the Grassmarket business. And he was careful not to alter it during a recent refurbishment.
If anything, the project aimed to strengthen the outlet’s classic feel. Aside from freshening up the whitewashed walls and installing a new wooden floor, much of the front-of-house work centred on creating bespoke oak units and benches on the ground floor level of the 40-cover restaurant (17 at street level and 23 downstairs).
In keeping with his ‘source local’ philosophy, Philippe employed local craftsmen for the work, including Patrick Giraud of Eben for the woodwork, Cyril Piot of Artisan Roofing for the pewter worktop and Charles Laing & Sons Foundry for the cast iron legs on the benches.
So seamlessly do the new elements blend with the original concept that Philippe says some of his regulars took a while to notice the changes.
And for him that only serves to highlight the success of January’s three-week self-funded revamp, which cost a claimed £65,000.
“I knew borrowing [money] for the refurbishment would be difficult [in the current climate],” he said.
“Funding it ourselves was the easiest and safest way to do it; it just means we need to tighten our belt for a year.
“It’s been money well-spent – the quality of the craftsmanship is unbelievable and we’ve kept the atmosphere, which is very important.
“The principle of Petit Paris was always to make people feel as if they were in France. I didn’t want to do too much and destroy the image.”
Beyond updating the interior, there were other aims to the project.
Philippe used the opportunity to put his own stamp on the restaurant, having parted ways with his founding business partner two years ago.
It also underlined his commitment to the capital – in business terms (he bought the freehold in 2004) and as his adopted home. 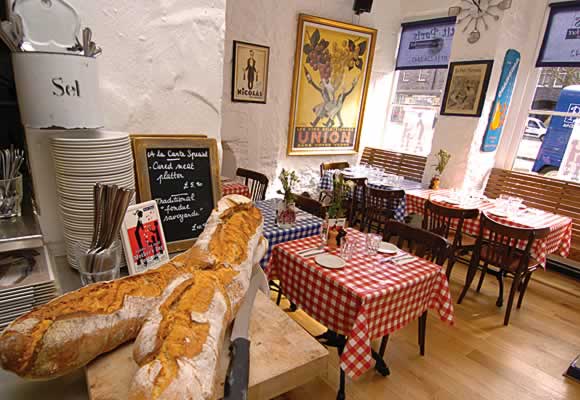 Hailing from Orléans, about an hour south of Paris, Philippe has been involved in the city’s eating out scene since 1989, when he spent a year working in the inaugural Pierre Victoire restaurant in Victoria Street.
After returning to France to complete his business degree, he came back to Edinburgh in 1992 and took on a franchise with the Pierre Victoire chain with wife Nathalie, opening a restaurant under its Chez Jules brand in Frederick Street. The two went on to open a second Chez Jules in Cockburn Street the following year. But a change of direction in 1996 saw them sell the Frederick Street outlet and Philippe take a job as a director of Pierre Victoire, overseeing its ten company-owned restaurants.
At that time, the group had around 85 mainly franchised outlets across the UK, Ireland and one in Brussels; and it was continuing to expand.
Philippe was to spend just a year working in what he described as a high pressure environment.
In 1998, the Pierre Victoire chain of more than 100 restaurants collapsed, but by then Philippe had moved on.
Despite its demise, he believed there was still mileage in aspects of the Pierre Victoire concept, which focused on French bistro-style food at reasonable prices.
And he was to embody many of them in Petit Paris – itself based in a former Pierre Victoire – which launched just before his former employer collapsed.

THESE components continue to be the rock on which Petit Paris is based. The restaurant has stayed true to its founding principle of French cuisine made with fresh Scottish produce. It still offers a main course and coffee deal (£7.90 now compared to £5.90 in 1998). It continues to offer a large selection of French wines, sourced from Forth Wines. And, of course, it has retained its 1930s Parisian bistro look.
But while Petit Paris has held steady to its own course, the trading environment around it has changed, in some respects for the better.
“I think things have improved a lot in 20 years,” Philippe said. “You can eat much better in Edinburgh for a start. People have become more adventurous and are willing to try things like snails. But trade has become very unpredictable. Ten years ago you knew a Saturday night would be your busiest. Now a Tuesday or a Wednesday can be your busiest day of the week; but we’ll take that.
“There are more restaurants and so more competition in Edinburgh but people are still going out and spending money.”
In fact, Philippe said the last two years have seen the restaurant record its best financial performance to date. He’s confident 2011 could turn out to be another bumper year.
A favourable exchange rate is continuing to draw plenty of tourists to Scotland’s capital; and he’s set to double his French-speaking staff to 25 ahead of the Festival.
He has also acquired a bakery unit in Leith (see story left), which produces hand-made bread for Petit Paris and other businesses in the city.
But buying a second restaurant would not appear to be on the cards.
“I still believe in a small operation,” he added. “If you want to do it well, stick to what you have. Working at Pierre Victoire was a great learning experience but it expanded so quickly. I don’t want to rule the world, I’m happy with a simple approach.
“And I’m very lucky to do what I do and to enjoy it. It’s thanks to the staff, you can’t do everything on your own and I’m very lucky to have great staff.
“This business is never smooth all the time and there are problems but you have to keep smiling; it could be so much harder.”
It seems there’s no shortage of joie de vivre at Petit Paris.