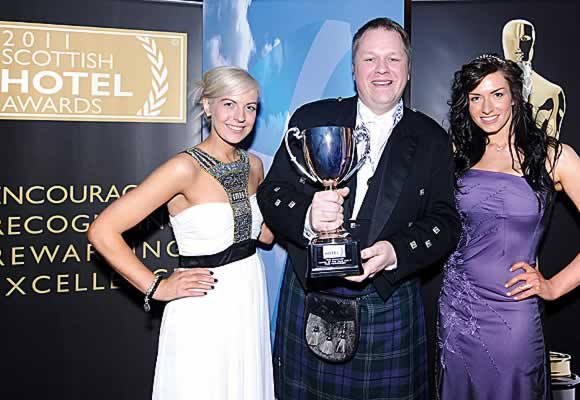 The Torridon is named best in Scotland for the second time

ONE of Scotland’s most remote hotels has been named the best in Scotland – for the second time.

The Torridon in Wester Ross, a former SLTN Hotel of the Year award winner, beat competition from across the country to take the title at the Scottish Hotel Awards in Glasgow’s Thistle Hotel.
It’s the second time the hotel, which is set in 58-acres on the banks of Loch Torridon, has scooped the gong, having taken the title in the inaugural awards eight years ago.
Judges said The Torridon, which takes in a 19-bedroom hotel and the 12-bedroom Torridon Inn, offered an “all-round high quality experience enjoyed by guests with a wide range of budgets throughout the year”.
The panel also said the owners and staff “work exceptionally hard to keep standards sky-high and the food is truly outstanding”.
Elsewhere in the awards, which are run by Hospitality Research Ltd, Stephen Carter, managing director of Cameron House on Loch Lomond, was awarded the Fellowship for Outstanding Industry Contribution.
The Chester Residence in Edinburgh took the award for Accommodation of the Year 2011, while the Five Star Service Award went to Glasgow’s Blythswood Square.
Ayrshire’s Costley & Costley Hoteliers, whose portfolio includes Brig o’Doon in Alloway and Lochgreen House Hotel in Troon, was named Hotel Group of the Year. Anne Gracie and Ken Gunn, of the Duisdale and Toravaig hotels on Skye were named Hoteliers of the Year; and the award for Hotel Team went to the staff at the Holiday Inn Aberdeen West.
Jerry Foster of Aurora Hotel Collection, whose portfolio includes Airth Castle, took the award for Hotel Manager.
A number of other awards were presented across a raft of categories, including food, management, events and rising stars.
Gary McLean, chairman of the judges, said this year’s awards scheme attracted a record number of entries.
“There is much to celebrate in the tremendous achievements and standards of Scotland’s hotels, especially in the wake of the harsh winter, which caused them many problems,” he said. “This year looks promising for many hotels, which have reported that forward bookings are up.”