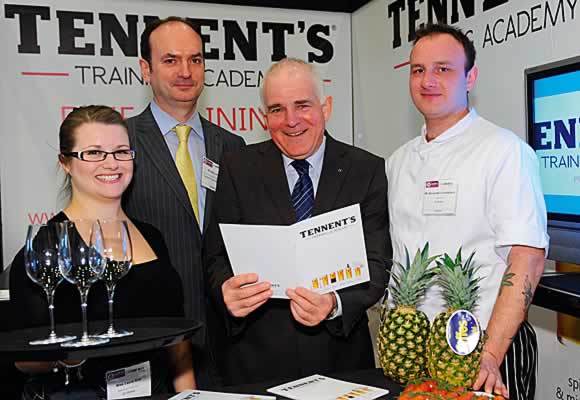 RISING stars in Scotland’s hospitality industry were recognised at this year’s ScotHot exhibition.

Adam Handling of the Fairmont St Andrews resort was named Junior Chef of the Year in the Scottish Culinary Championships, organised by the Federation of Chefs Scotland; while the Modern Apprentice Junior Chef Skills Challenge was won by Stacie O’Meara of foodservice firm Aramark@Ageon UK.
Danielle Lee, general manager of the Crown Court Hotel in Inverness, took the Young Scottish Hotelier of the Year title, and Liam Bedwell, bar and restaurant manager at Glasgow’s West bar and brewery, was named Young Scottish Restaurateur of the Year.
ScotHot’s inaugural Chefs Hall of Fame awards went to Bruce Sangster and Stuart Cameron in recognition of their “achievements and dedication” to the Scottish hospitality industry; and Glasgow School of Art won the Scottish Design College Award.
The Future Talent Restaurant award saw hospitality students from six colleges go head-to-head in a live restaurant scenario, serving more than 360 members of the industry during the three-day trade show. The winner was due to be announced at a special awards ceremony in Glasgow’s Hilton hotel as SLTN went to press. The awards formed part of a packed trade exhibition, which was held at Glasgow’s SECC earlier this month.
New features in the 38th ScotHot exhibition included an on-trade drinks pavilion, run in association with the Scottish Licensed Trade Association; the Source Local pavilion, which was dedicated to Scottish products; a design pavilion; new product zone; and Sustainability Live, which aimed to help operators put sustainability at the heart of their business.
The trade show also featured a number of seminars, one run by the team behind the Healthy Living Award. Yvonne Traynor, project manager for the award, said ScotHot provided a “great opportunity” to network and “share the benefits of achieving the Healthy Living Award”. The award aims to make it easier for consumers to know where to go for healthier food; so far it’s been attained by over 670 venues in Scotland.
ScotHot director George Tsangari hailed this year’s three day event a success, saying it attracted nearly 3000 visitors on the first day alone.
“We are thrilled with the response from the industry and delighted that so many representatives took time out of their busy schedule to make the show a success,” he said. “This was the 38th successful year of ScotHot, demonstrating the importance of an event dedicated to the Scottish industry and providing practical advice, valuable networking and genuine opportunities to boost sales and profits.”