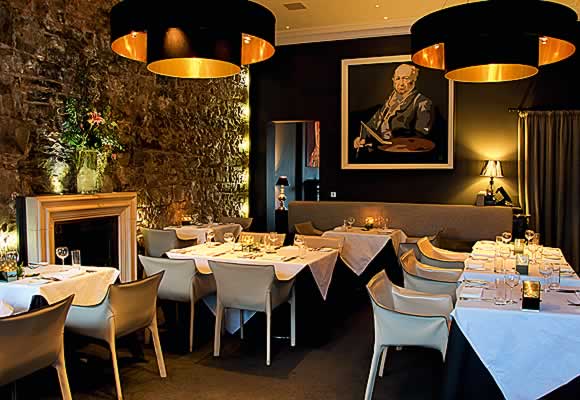 Barrie Brown talks fine dining, funding and about his fondness of refurbishments

WHEN Barrie Brown added the latest string to the bow of his Edinburgh bar, club and hotel, Hawke & Hunter, last month, he concedes it may have raised a few eyebrows.
Not only did he launch a fine dining restaurant in a city that boasts its fair share of top notch eateries, including five Michelin-star restaurants, he opened Mark Greenaway at Hawke & Hunter amid some pretty grim financial conditions – and at a notoriously quiet time of year for the trade. 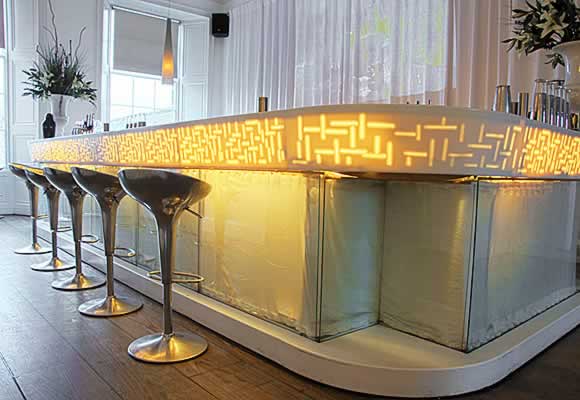 The restaurant (top) was refurbished ahead of its relaunch under chef patron Mark Greenaway last month. Hawke & Hunter boasts a number of eating and drinking areas, including a whisky bar and the cocktail bar (above).

For Barrie, though, the circumstances couldn’t have been better. From a timing perspective, he was able to close and refurbish the previous restaurant during the relatively quiet post-Christmas and New Year trading period. It was also an opportunity to realise a long-held ambition. But there were other factors at play, too.
Mark Greenaway, the chef patron whose name is above the restaurant’s door, is a childhood friend of Barrie’s. Having first met on the school bus aged just 13, the pair kept in touch as Mark worked across the UK and Australia as he established his career as a chef. Barrie, whose Brown Taylor Group also operates the 99 Hanover Street bar in Edinburgh, 99 Bar & Kitchen in Aberdeen and Bruach in Broughty Ferry, said it was a natural progression for the two to link up.
Described as “progressive British” in style, their restaurant majors in local, seasonal produce and ‘head-to-tail’ cooking; examples include a Dornoch lamb dish cooked four ways, featuring a lamb bacon.
Prices are around the £7 to £8 mark for a starter, between £16 and £28 for a main, and £6.50 for dessert from the a la carte menu. There’s also a daily market menu, offering three courses for £20; and the Tour Menu – an eight-course tasting menu costing £65.50, or £90.50 paired with wines chosen by the sommelier.
Barrie is convinced the offer is good enough to compete with the celebrated players on the capital’s dining out scene. “People always talk about Edinburgh’s ‘big five’ restaurants – I think we can be the sixth,” he told SLTN. “If you don’t have a point of difference you’re competing against all the other restaurants in the city and that’s a much bigger and more fierce market. Mark is a great and very well-known chef and he brings that point of difference. We’ve only been open a few weeks and it’s going really well so far. But it takes time to build a business, especially in this climate. I’ve always preferred to build businesses slowly rather than too quickly and then the honeymoon period is over.” 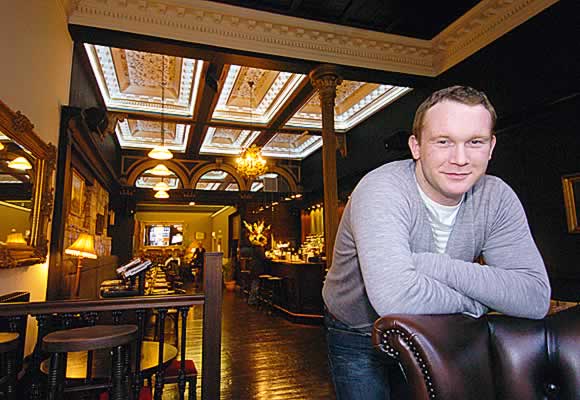 Barrie Brown aims to take his 99 concept to other cities, including Glasgow.

A gradual approach is one Barrie has applied to the development of Hawke & Hunter from the outset. When he launched the Picardy Place venue in November 2008, it comprised a bar, restaurant and three bedrooms. He went on to add a whisky bar and additional bedroom on the second floor, followed by the Secret Garden, an outdoor area which won SLTN’s Award for Best Smoking Facilities last year.
After the garden area came a pool hall (the Green Room) and a nightclub (Below Stairs) before the new restaurant opened its doors last month.
And Barrie’s not finished yet. When SLTN met him at the 1000-capacity Hawke & Hunter earlier this month, the Green Room was in the midst of being transformed from a pool hall into an events and live music space. Once that’s up and running, there’s one final piece left in the jigsaw. Barrie has secured planning permission to create a further 17 hotel bedrooms in the floors above the Green Room.
The only potential fly in the ointment is finding the funds for the £500,000 project. Having self-funded each of the company’s projects so far – and aware of the challenges involved in securing funds from banks in the current climate – Barrie is pursuing a couple of private investment routes. But, true to his long-held philosophy, he’s not in any rush. “We’ve gone this far and not been tied into the banks so I don’t know if we want to start at this point in time,” he said. “The level at the moment with some banks is that the security is the same as the loan. We’re looking at some other options, but we’ve got no fixed dates for completing the rooms. I never had any plan in terms of the whisky bar or the Secret Garden. It wasn’t a case of this is our masterplan. But the rooms will be the last piece of the jigsaw. Hopefully then that will be us finished here – although it might be like the Forth Bridge and we just keep going! I am a bit addicted to project-based work.”
For all that Barrie appears to relish a refurbishment, he said each of Brown Taylor Group’s venues is designed to stand the test of time. That there are subtle similarities between the outlets’ interiors is no accident.
Indeed, he plans to unite the various interests in the portfolio in a more formal way. Along with the five luxury ski chalets the company has just bought in France, each of the venues will be brought under a Brown Taylor Group marketing umbrella. Barrie reckons the group marketing will help the company win business at a time when competition for consumer spend is fierce.
There are also plans to add to the group, which he started in 2006 with £20,000 and now employs 180 staff and turned over more than £4 million last year. He wants to expand his 99 concept and has Glasgow and Leeds in his sights, if he can secure suitable premises. “I think 99 works well in cities,” he said. “I’d love to open a 99 in Glasgow. Not many operators go from Edinburgh to Glasgow, it’s usually the other way. But it would need to be the right location; location is key. And it’s all just on paper at the moment. We had a record December and our units all performed well in January but trade in general is very different to how it was, say, two or three years ago.
“In the first couple of years, we could rely on people coming in every night. Not any more. You have to look for those people and give them reasons to come to your venue. Turning the Green Room into a dedicated events space is an example of that. We’ve catered for events in the past – now we can got out and aggressively market it. Like I said, I never had a masterplan [for Hawke & Hunter], we’ve added to it and changed things as we’ve gone along, and I think the market has dictated that.”
One suspects Barrie might not be quite finished with Hawke & Hunter just yet.