AN historic Scottish Borders coaching inn said to have been visited by literary greats including Sir Walter Scott, James Hogg, Robert Burns and William Wordsworth is for sale.

The Gordon Arms in the Yarrow Valley near Selkirk was dates back more than 200 years and is said to have played host to the poets, novelists and playwrights in the late 18th and early 19th centuries.

Today, the business is said to attract strong mix of locals, passing trade due to its location on the A708, and walkers, cyclists and outdoor enthusiasts visiting the area.

In addition to eight en suite letting rooms, the inn has a “cosy bar” with wood-burning stove which can seat  up to 20, a 60-cover restaurant, and a dining and function room with a capacity of 60.

Outside, there’s a large beer garden to the rear and side of the property.

There’s also an adjoining two-storey extension which is said to offer potential for development into additional letting or owner’s accommodation.

Christie & Co, which is marketing the Gordon Arms with a price tag of offers over £400,000 for the freehold, said there is scope to build on the already established business.

“A great opportunity has become available due to the client seeking early retirement; they have owned and operated the business for eight years,” said the agent.

Earn a spot on water’s edge

Three pubs in Alexandria on the market 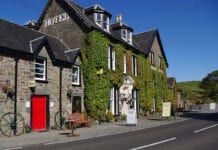