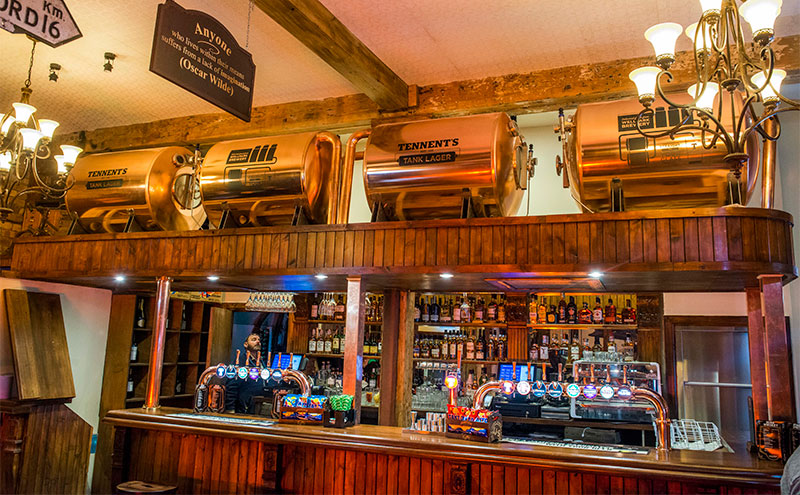 AS both awareness of, and demand for, tank beer increases in the UK, the team at Malones Pub Group took the decision to introduce a significant tank beer offer in the company’s newest venue.

Malones, in Edinburgh’s west end, opened on January 26 with a five-tank installation from Tennent’s Lager (pictured above), as the group wanted to offer its customers the freshest and best tasting pint possible.

“Everyone always wants another pint of our tank lager because of how good it tastes,” said Danny McCormick, the bar’s general manager.

“It comes from the brewery straight to the tank, essentially without touching air until it’s getting poured into the glass, so customers know they are going to get the best pint possible.

“And we know as well that we are giving our customers a quality pint every time with tank beer, they have all been raving about it.”

However, the installation of tank beer has had other advantages for the bar, according to McCormick, who said that the format is viewed by many consumers as a more upmarket proposition when compared to standard draught.

He said: “Our venues have been more traditional, session Irish bars and the introduction of tank beer has allowed us to move in a more premium direction.

“The chance to offer a premium version of Scotland’s most loved beer, Tennent’s, was very attractive to us.”

And although there is a shorter shelf life on tank beer, the bar has not had any issues with increased wastage, according to McCormick.

“Once the beer hits the tank it can stay there for 28 days and once it has been tapped we have seven days to sell it,” he said.

“We’ve never done less than a tank in seven days, so we’ve never had to throw any out.”

While only Malones in the capital and The Citizen in Glasgow have installed Tennent’s Tank Lager so far, and a handful of venues across the country have other beer brands available in tanks, McCormick believes that tank beer will move from being a niche offer to become more widespread in the Scottish on-trade in the years to come.

“I reckon more bars will start taking it on, I know there’s a lot of people interested in adding it to their bars,” he said.

“I hope our tanks are showing other bars that tank beer is a really good route to go down.

“It is a massive talking point at the moment within bars; a lot of places are looking at it.

“If tank beer is not the big thing at the moment in the trade, it is the next big thing.”

Another added advantage of the format is that the tank itself acts as an advertisement for the beer, said McCormick.

“They absolutely market themselves.  You can’t miss them.

“We have a blackboard up letting our customers know when the tanks have been filled and when they have been tapped. That tells people just how fresh the beer is and that is all the POS we find we need for it to do well.”